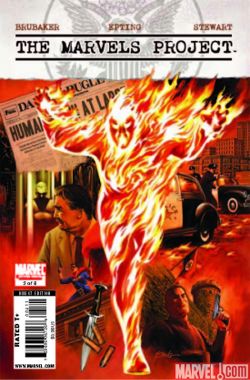 I was impressed with the first issue of The Marvels Project, and I even said it looked like it might be shaping up to be the best written series of the year from Marvel Comics. With the second issue of The Marvels Project hitting comic book stores this week, do I still think it could be the best series of the year? Yes, The Marvels Project #2 was able to maintain the momentum created by the first issue. The limited series is a great re-telling of the stories behind the heroes of the early days of Marvel. Be warned that there are spoilers ahead. The greatest strength of The Marvels Project is the rich characterization of the heroes. Much of the story is told from the viewpoint of Dr. Thomas Halloway. Ed Brubaker's writing pulls the reader into understanding exactly what drives Dr. Halloway to become the costumed crime-fighter, The Angel. It is also amazing how Ed Brubaker's writing and Steve Epting's artwork can make the heroes appear both larger-than-life and then all-too-human at the same time. Nick Fury and Red Hargrove are just ordinary soldiers, but they take out a convoy of German soldiers with superhuman ease. While the Human Torch might appear as an artificial flame creature, he slowly emerges as one of the true good guys. There is a part of The Marvels Project that is reminiscent of The Watchmen. I couldn't help thinking Watchmen when seeing a scene where one of the early heroes is found murdered. Of course, being reminiscent of The Watchmen isn't a bad thing, as long as there are other unique story elements, which there are in The Marvels Project.