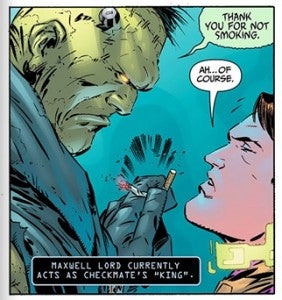 In Justice League: Generation Lost, the resurrected Maxwell Lord used his mind-control powers to convince the entire world, except for a small handful of his former allies, that he didn't exist. That left a ragtag group of former Justice Leaguers with the responsibility of bringing to justice the man who had killed one of their best friends, all while dodging other superheroes and government agents who thought they were crazy.

Today, it was announced that O.M.A.C., the book in which Maxwell Lord is currently appearing as the head of the super-spy organization Checkmate, will no longer exist come April and we've already speculated a bit about where its title character might end up. What did we fail to consider when speculating that O.M.A.C. might end up working for S.H.A.D.E.? A DC All Access column from two weeks ago, wherein Paul Levitz told readers that the character would cross paths with the Justice League International.

Even though Infinite Crisis, the event that made him evil, no longer "counts" in the DC Universe timeline, and even though Justice League: Generation Lost is largely non-canonical at this point, too, it seems too big a coincidence that O.M.A.C., whose central antagonist so far seems to be Maxwell Lord and his Brother Eye satellite, would cross paths with the JLI. Max has been the central antagonist of Booster Gold's life since he pulled the trigger against Ted and if any portion of Generation Lost is still canon, he's already had one pretty ugly dust-up with this team, albeit before they were technically called the Justice League International.

Either way, the character's history with the JLI is hard to ignore and assuming that Checkmate stays intact and/or that he's still a part of it, Max seems a natural fit to join the book, either as a straightforward villain or as a hero whose motives don't always line up with those of our heroes.

Of course, since Levitz had a plan to cross the two books over before the cancellation announcement ever came through, there's always the possibility that the mysterious stranger wishing the JLI death from behind a computer monitor in this month's issue may in fact have been Max. If anyone was in a position to know that the character would be available soon, it may be Justice League International writer Dan Jurgens, who is currently co-writing Green Arrow and future issues of  Superman with O.M.A.C. co-writer Keith Giffen.

The answer to this question might come down to how DC perceives Maxwell Lord's "brand identity." Is he best known as the somewhat-shady huckster who put together the original JLI, or is he best known as the villain who abused Checkmate for his own purposes? There's a lot of history behind the former, but the latter has the luxury of being the current incarnation immediately prior to the New 52 relaunch, being put in place by DC's Chief Creative Officer Geoff Johns and having been used in other media (briefly on Smallville).