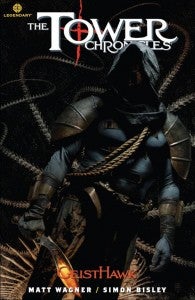 Thomas Tull, Matt Wagner and Simon Bisley's The Tower Chronicles has added a third superstar talent to its list of cover artists, in the form of accomplished comics and film artist Tim Bradstreet, who will draw the cover to the third issue of The Tower Chronicles: Gesithawk. The first two issues of the series have had covers by Jim Lee (who drew #1, currently on sale) and Alex Ross (whose issue will be released next month). There will be another announcement, probably coming soon, according to series writer Matt Wagner. "They've gotten these real hot shot cover artists to grace the first four issues of the first book," Wagner told ComicBook.com of Legendary's publishing and marketing strategy, "and yet at the same time, they're trying to reach out to the bookstore audience as well. I think that's smart as a whip." The publisher has had a busy weekend, announcing two major projects last night. Comics icon Grant Morrison will write Annihilator for the imprint, and filmmaker Guillermo del Toro will present a prequel to his upcoming film Pacific Rim.