With less than month until Avengers: Age of Ultron, ComicBook.com is launching "Avenging April." Each Thursday, we'll discuss a nugget of Avengers history from comics, animation, or video games. Today, well address the much forgotten arcade side-scroller, Captain America and the Avengers. 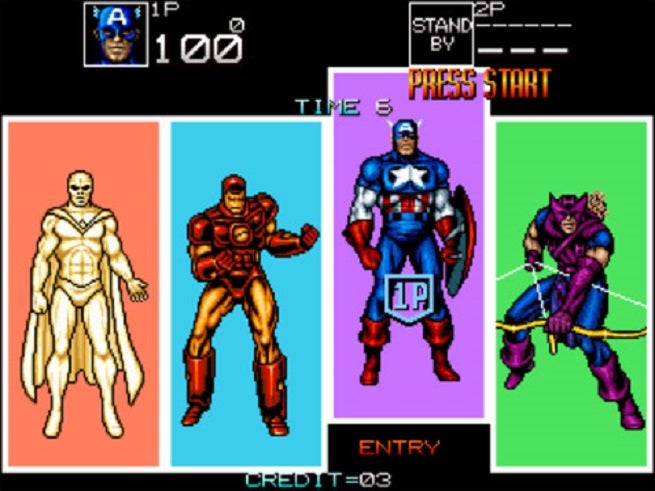 Before there was the famed X-Men arcade game (that was based off Pryde of the X-Men, a pilot for a canned X-Men animated series), there was Captain America and the Avengers, a similarly styled arcade game that featured Captain America, Iron Man (whose power comes from his "steel suit of armor"), Hawkeye, and the Vision. The game doesn't follow any particular comic canon, just the fact that the Red Skull is trying to rule the world and has recruited a team of B and C-listers to combat the Avengers in his aid of conquest.

Released in 1991 during one of the biggest arcade crazes, the game took the Avengers through a handful of stages fighting the likes of generic cannon fodder robots and bosses like Whirlwind, Klaw, and a weirdly-designed Juggernaut. Each character had two level of attacks, with either short-range punches or an "Avenger Attack," using either your shield, arrow, plasma ray, or solar beam, obviously depending on the Avenger. Cameos by the likes of Wonder Man, the Wasp, Namor for some reason, and Quicksilver were a nice touch, as they dropped by every now and then to dispense health and power-ups.

The game itself went through many ports. There was a Sega Genesis release, along with a Nintendo, Game Boy, and Game Gear ports.  Several changes were made for each, like the NES version only having Cap and Hawkeye (the non-laser firing members) as playable characters, since the game's mission revolved around a mission to save Iron Man and Vision from Red Skull. The game play is reasonably simplistic throughout, especially if you can memorize patterns of the enemies. As a kid, I remember barely being able to reach Whirlwind, and as I recently played it again, that remains the case. It provides enough of a challenge, and there's a proper walkthrough of the game that takes about 30 minutes to beat. Not a bad time killer.