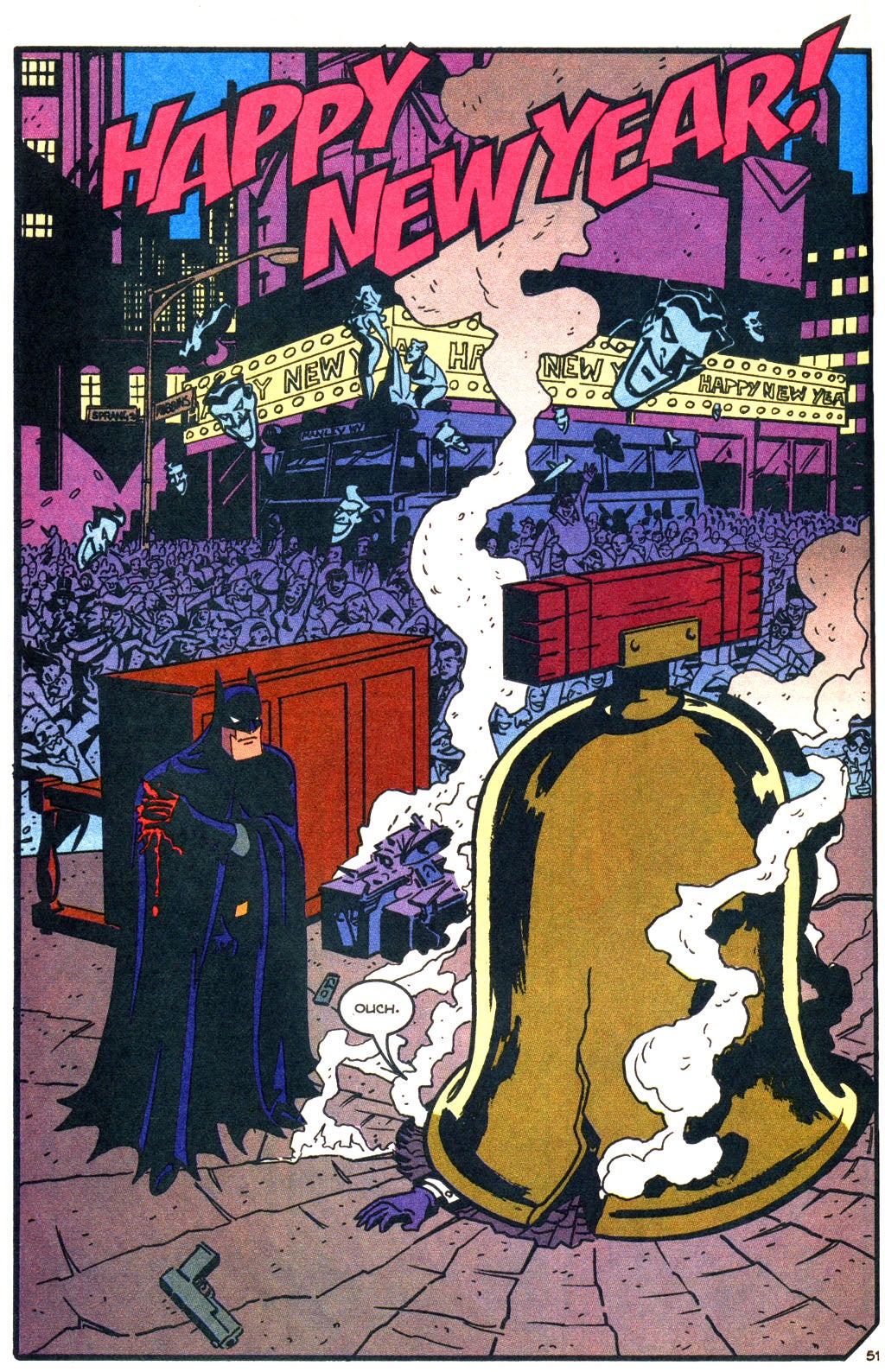 In honor of New Year's Day, Throwback Thursday is celebrating by rummaging back through comics' best offering for the holiday. Unsurprisingly, the New Years cheer comes from Paul Dini and Bruce Timm's Batman: The Animated Series universe in the Eisner-winning "The Batman Adventures Holiday Special #1."

In "What Are You Doing For New Years?," a short story bookending the anthology's equally impressive chapters, the Joker makes a New Years resolution not to kill anyone for an entire year—which means he'll have to pull double duty to squeeze as many murders in before midnight. And how does the Joker get the most bang for his psychopathic buck? Why, by crashing Gotham's downtown New Years Eve celebrations of course. It's a deliciously deceptive ploy that reiterates the Animated Series' Joker as one of the best. His crimes straddle that thin line between prankster and murderous sociopath. Only in this universe would the Joker even consider the idea of not killing for a full year.

It only gets better from there. Knowing full-well that he'll stick out like a sore thumb amongst Gotham's normal citizens, the Joker throws Batman off of his trail by handing out party favors of his own brand: Joker masks! You'd think Gothamites would scoff at brandishing the face of their city's most wanted man, but they're cool with it, making Batman's task of hunting down the Clown Prince of Crime even more frustrating. Inevitably, Batman finds the Joker, who's rigged Gotham's New Year's bell (think New York City's Times Square ball) to emit a sonic scream that will reduce every party goer's brains to scrambled eggs. And to think their biggest concern was a hangover.

As the clock nears midnight, Batman stops the sonic screamer in the most Animated Series way possible. Not with a BATARANG, not with a bomb diffusion kit, but with a spray of the bubbly. That's right, Batman douses the device in New Year's Eve champagne, shorting its circuitry out. It's this Batman's best move since thwarting Mr. Freeze with a thermos of chicken soup in the FOX series episode "Heart of Ice" (which, hey, also won a prestigious award). As for the Joker? Well, he's crushed by the giant bell. Don't worry, with this being an Animated Series tale, the Joker walks the normally lethal blow with a simple "ouch." Man, we miss the simpler times. 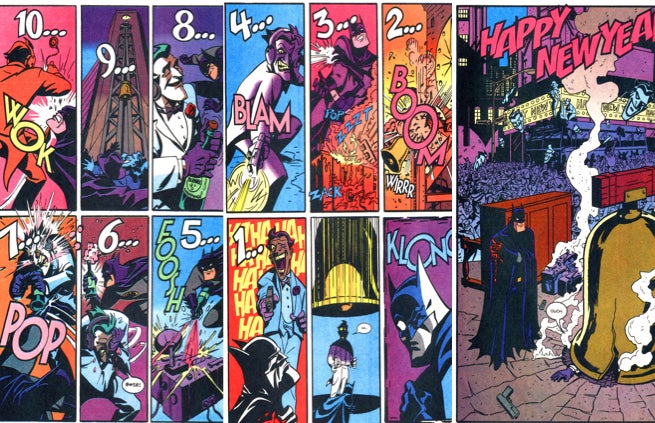 The Holiday special's true gem, however, is the epilogue that follows the New Years Eve Shenanigans. In "Should Old Acqauintance Be Forgot?," Paul Dini welcomes readers into a special New Years tradition between Batman and Commissioner James Gordon. In the animated series' most intimate look at Batman and Gordon's relationship, it's revealed that the two friends share a cup of coffee every New Year's Morning. It's a celebration of surviving another year in the war on crime, a well-wishing for another successful year, and of course, a reconstitution of their enduring friendship. And of course, Batman always picks up the tab. It's heart-warming stuff, showing the bond these two characters have  during a time of reflection. 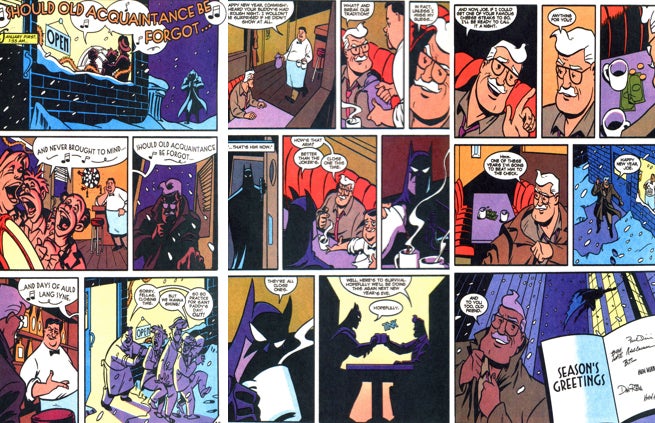 Together, these two stories distill everything right with Batman: The Animated Series, and what great comics can do. The stakes are high, but the story is never lost in its own sense of self-importance. The threat is real, yet no one has to have a gun to their head to prove it. And most importantly, it wears its massive heart on its sleeve. Comics rarely tackle the winter holidays with true earnestness, opting to mock the good cheer with fist fights against Santa Claus. Those stories are good and all, and certainly have  a place, but these two stories balance out the shelves. They remind us that the Holidays, and especially New Years, are a time for good-hearted fun and quiet reflection.

And as a bonus, the short stories were later adapted into Batman: The New Adventures with the episode "Holiday Knights." It's a near literal translation of the special, albeit with Robin's inclusion and special cameos by Bruce Timm and Paul Dini.

As 2015 will bring us plenty of new reasons to love comic, it's worth your time to pick this issue up and revisit some old ones. Sadly, comiXology still hasn't added it to their library. Maybe their resolution this year can be a correction of that?