Tonight, Avengers: Age of Ultron his theaters worldwide, which is looking to dominate the globe. Today, we'll talk about the legendary crossover between the JLA and the Avengers in the aptly called JLA/Avengers, or Avengers/JLA, depending on the issue. 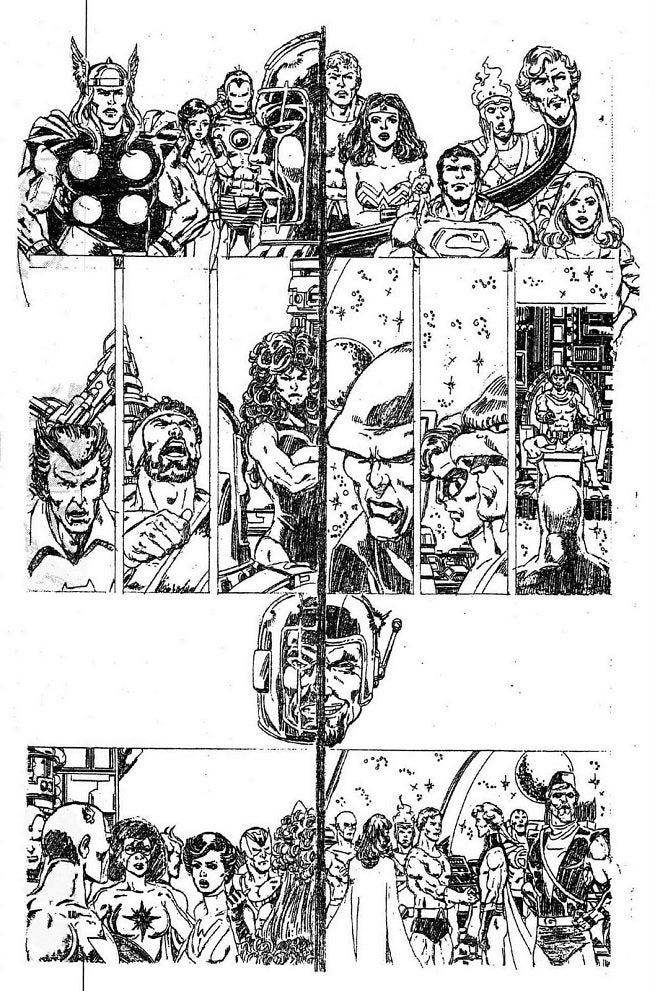 Given the Big Two's history with this project back in the 80's and it not going well, fans speculated that something on this grand scale would never pan out . Comic creator Rob Liefeld had bought the the 15 or so pages from George Perez and basically loaned them out to conventions for a little while so fans could see the potential of the biggest "what if" in comics. Originally it was going to be written by Gerry Conway, with Perez still on artistic duties, but complications arose and the project was post-posted until 20 years later. Perez was still on board, but Conway was replaced by writers Kurt Busiek and Mark Waid. However, even more complications arose when Waid became exclusive to CrossGen, and Busiek ended up going solo. Which is fine if you take into account the chemistry between Busiek and Perez during their Avengers run.

So what happens this time around? Well, the original Conway/Perez involved Kang the Conqueror, but here the story involved Silver Age baddie Krona who is in search for the origin of the creation of the universe itself. Somehow he lands in the Marvel Universe and runs into the Elder, the Grandmaster. Obviously not wanting his universe to be destroyed, the Grandmaster proposes he and Krona play a game for the sake of the Marvel Universe. The wager: If Krona wins, the Grandmaster will take him to Galactus as he witnessed creation and his answers will be given. If Krona loses, he has to spare the universe and move on. Pretty easy, right? Well, Krona doesn't exactly play fair. When summoning the champions to represent each player, Krona decides to use the Avengers as his and gives his own universes' Justice League to the Grandmaster. So yeah, to save their own world, the Avengers have to go down. 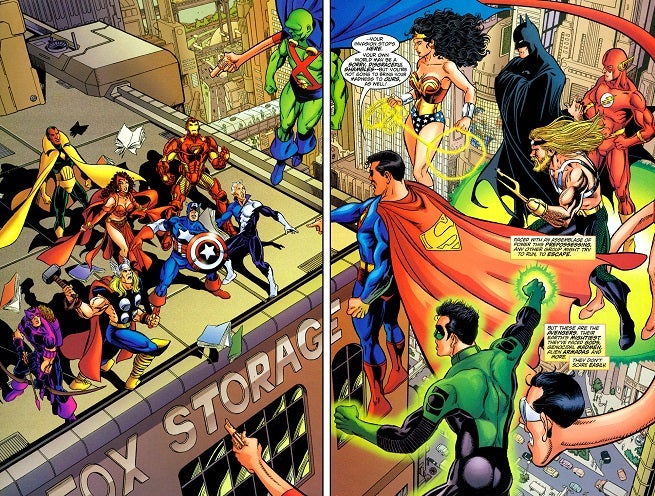 The setup thus far mirrors the previous big crossover Marvel vs. DC/DC vs. Marvel, but here's where JLA/Avengers differs and branches off and becomes its own thing. Even in the 4-issue format, there's more actual dialog and character development between the forces. Over at the Marvel Universe, the JLA look at the world, thinking that the Avengers could not better things given their powers. Coincidentally, the Avengers get the impression that the JLA are seen as facist gods who are worshipped by their citizens. A serious misunderstanding. Quicksilver's quip about how they have a museum dedicated to the Flash is still golden. The Grandmaster and Krona make the game, not really a brawl like Marvel vs DC, but more like a series of games a la capture the flag, but the "flags" in this case are artifacts and weapons from each universe, e.g. Kyle Rayner's Power Battery and the Cosmic Cube. 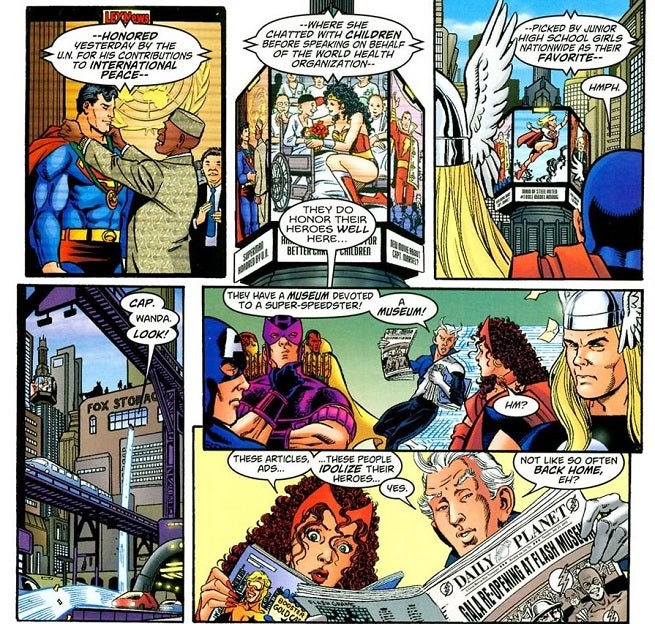 The problem with this is that the bout ends up being a tie momentarily until Batman and Cap show up and Cap throws the game to the Justice League since him and Bats were off figuring out why they're fighting in the first place. Of course, Krona being a galactic jerk, he tries summon Galactus. As a counterstroke, Grandmaster merges the universes together, but not in the Amalgam way. What he does is, he merges the actual timelines of the worlds, which means that the JLA and Avengers have always been friends and the previous crossovers aren't written out of canon per se, but rewritten in a way that they were always on the same side fighting any and all great foes that present themselves. 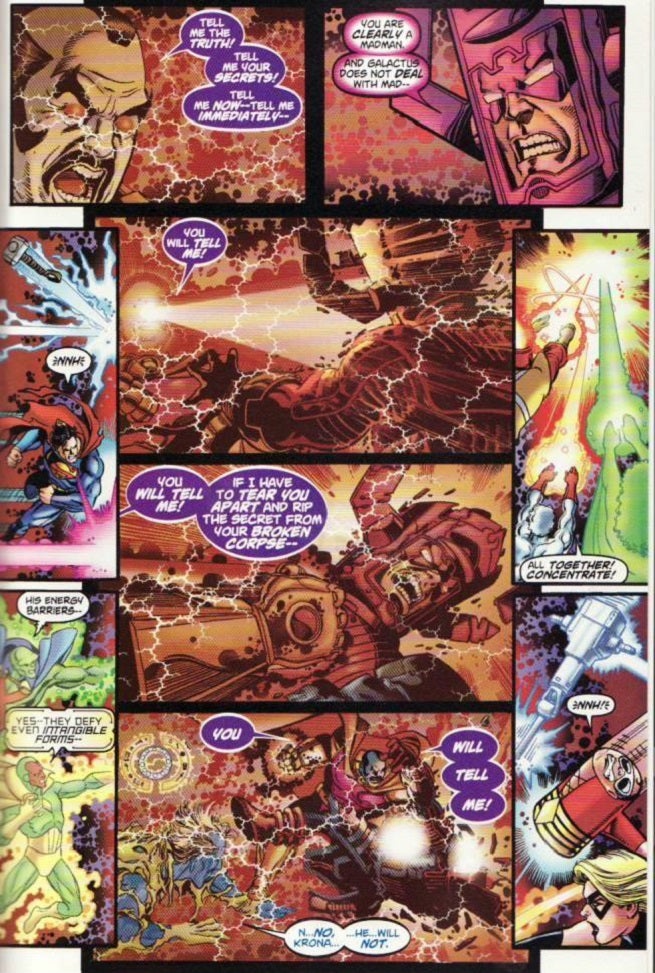 But that only works for so long.

Much like oil and vinegar, the universes can't actually stay together long and Krona now sees this as an opportunity to create a new Big Bang of sorts and destroy both universes at the same time. His current opposition now: Captain America and pretty much the entire Marvel Universe (well, those that at least had "Avenger" on their resume). What you have next is one of the most massive massacres in comics. Krona is just wiping out all the heroes that comes before him, one right after the other like swapping flies. While he's doing that, he doesn't notice Hawkeye aiming an arrow right at the machine he's using to keep the worlds together. 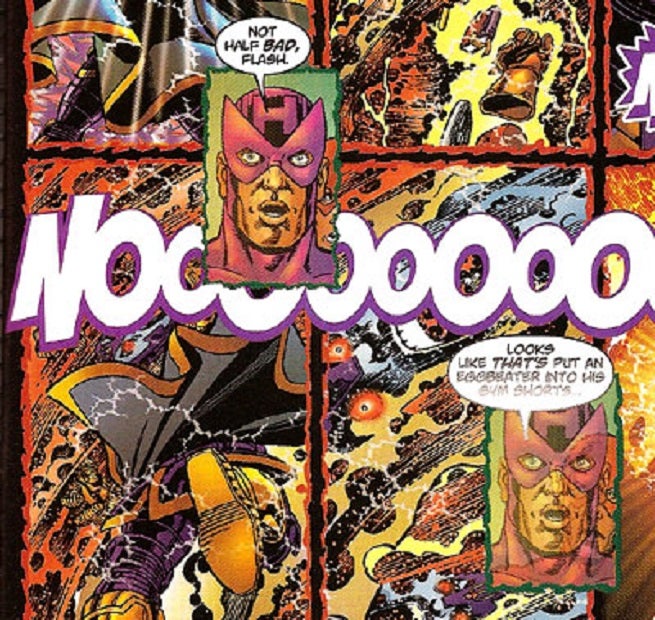 With that, the universes are restored, with big assist from the Spectre Hal Jordan. The aftermath left the heroes on both sides questioning their positions as heroes and their duties to their respective world and how they should uphold the meaning of the word. As for Krona, well the energy of the machine sort of imploded around him, turning him into a cosmic egg, which is then stored and guarded in the Watchtower. Smiling, the Grandmaster states how this was his favorite game he's ever played as all sides were victorious.

It's been over ten years since the events of JLA/Avengers and gives an answer to one of comics' lifelong questions. The notion that it wasn't a full-on fight was a solid decision and the chemistry between Captain America and Batman continues from Marvel vs DC. Even Cap had some good moments with Superman, and Superman giving Steve proper kudos is another great moment of mutual respect.

So fans, obviously you're excited for for Avengers: Age of Ultron like the rest of us, but do you remember this memorable moment in comics? Were you rooting for anybody in particular? Sound off!