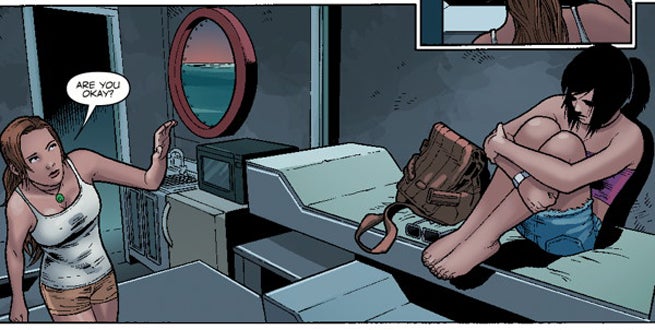 When Crystal Dynamics and Eidos Interactive decided to reboot the Tomb Raider franchise, fans didn’t know what to expect. After a bevy of great to phenomenal reviews, a re-issue for the new generation of consoles, and a sequel announcement, they teamed up with Dark Horse Comics to further reinvigorate the franchise. Just as they turned to Rhianna Pratchett, a celebrated game writer with a penchant for female heroes, for the game’s writing duties, they turned to Gail Simone, a celebrated comic writer with a penchant for female heroes (sensing a theme here?), for the comic.

After an arc that explored some left over themes and storylines from the first game, Pratchett joined Simone for arc number two. The story there was a bit zany, almost a palette cleanser after the deep and darkness-filled (re)beginning of Lara Croft’s tales. Now, for the final arc of the comic (at least for now), Rhianna Pratchett takes over as the solo writer for the comic in a storyline meant to serve as a lead-in to the second game, Rise of the Tomb Raider, set to hit Xbox One in Holiday 2015, just as the first arc was a lead-out from the first.

We spoke with Pratchett about the new arc, exploring the world and life of Lara Croft, slash fiction, and of course, “cupcakes, cats and underwater shenanigans.” She brought along an exclusive preview of Tomb Raider #14, as well.

Rhianna, taking over solo on the series is a big deal for you, but it’s also not your first experience, with other video game comics in your past – what did you learn from Gail Simone in your six issues co-writing with her that maybe you hadn’t quite figured out in your previous work in comics?

Rhianna Pratchett: It was great to be able to work with a writer who is as experienced and talented as Gail. And one who also has a history of writing strong and interesting female leads. Working with her really helped me up my game as I was so keen not to let her down as co-writer. I learnt a lot about writing good action from Gail and also ways in which to ramp up scenes with a little twist of the unexpected. We had a lot of fun creating the second arc together, particularly the last issue where we managed to get Lara Croft, Elizabeth Bennet and the London Underground into the same scene.

The first year of the story really focused primarily on fallout from the first game. With Rise of the Tomb Raider out this year (And a six-issue story arc landing a trade early fall, right before the release window), how much do you plan to bridge the gap a bit more story-wise, and aim this more toward the future than the past?

RP: Gail and I were originally crafting the second arc to run into the next game. A few issues into our run Dark Horse and Crystal asked if we would be interested in extending it a further 6 issues. Gail had other projects on, so it was decided that I should take the reins for the last leg. That was quite freeing for Gail and I because it meant that we could complete our story, have a blast with it and not worry too much about what was happening in game development land.

That’s meant that folding the comics into the game has fallen to me. It certainly helps that I am already working closely with the team over at Crystal so that I can help coordinate the stories between the two different mediums. Crystal also had a couple of ideas of things they wanted to see play out in the comics as well.

Ultimately I’ve tried to craft a tale that helps bring Lara to the emotional state that she is in at the start of the game and also sees her (and other characters) wrestling a few personal demons along the way. I’d say there’s also a hearty dose of classic Tomb Raider style adventuring in there as well. Lots of clambering around, discovering ruins and fighting off aggressive local wildlife.

Your solo story is called “The Watchers” and introduces these hoodied characters we’ve seen in the preview – what can you tease about this group of sweatshirt enthusiasts?

RP: It’s not so much these particular characters who are important, but who they work for and why they have a particular interest in Lara.

What’s something about your main characters, about Lara and Sam for example, that you can explore (better/more in depth) in the comics but couldn’t really in the games? What is it about comics that allows that for you?

RP: There’s more space for storytelling in a comic than there is in an action-heavy game like Tomb Raider. As a writer you don’t need to factor in gameplay, mechanics or level design, so in that sense it’s quite freeing. The story and the art are running the show in comics and that’s not often the case in games where often narrative has to fight their corner along with everyone else.

RP: Lots of fast-paced action in a game doesn’t really allow much time to portray the inner journey of a character, especially since it’s the outer journey that forms the primary challenge for the player. Therefore you need to find quieter moments to have the more emotional and characterful exchanges. However, in a comic it’s perfectly possible to run both things at the same time as the inner monologue of a character doesn’t distract from the outer action and in fact can bring added nuance and texture to it. So that’s meant that in big action moments, Lara’s inner monologue can be quite lively in a way that it couldn’t be during the game.

I’ve also tried to build on the world and characters we established in the Tomb Raider reboot so that readers can find out more about the lives of those they encountered in the game. Ultimately we didn’t have much time to give the secondary characters too much screen time, but behind the scenes they all had a lot of texture and backstory created by the team. That’s certainly been great fodder for the comics.

I’m sure you’re well aware, there is a lot of Lara and Sam “shipping,” fan art, fan fiction and such out there, alongside other looks at the characters in the games. What do you think of the way fans have taken to that friendship/relationship, in its many interpretations?

RP: I have to admit that there have been a few slash pairings that I didn’t see coming, like Alex and Jonah. But honestly I’m honored that I’ve been able to help create characters that fans can get that into. I love seeing all the cosplay and artwork out there. It’s phenomenal.

I like to end on a “personal favorite” moment. What’s a moment you can tease from your first arc that you’re particularly excited for fans to see, or a character interaction that surprised you while writing that you can’t wait for readers to get to?

RP: There was a story told by one of the characters in the first game that Lara gets to experience firsthand, and that was a lot of fun to write. There are also smatterings of a few of my favorite things in there - cupcakes, cats and underwater shenanigans.