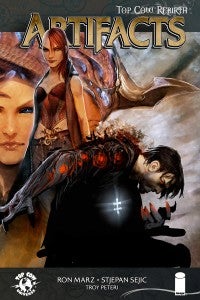 Top Cow is conducting a talent search that will run from now until December 31, 2012, looking for both writers and artists to submit short story starring two of their characters and be judged by Top Cow President and C.O.O. Matt Hawkins, writer of the just-released Think Tank. "We are looking to hire two writers and two artists to do paid work for the company in 2013/2014," said Hawkins in a statement outlining what they're looking for. "The goal of the Talent Hunt is to find two previously UNPUBLISHED writers and artists and give them a chance to expose their work to the comic industry in the printed and digital formats. "The comics industry is an awesome one to work in…both Marc Silvestri and I thought about this and realized that at some point someone gave us a chance. We're looking to do the same for a few people. 4 people may not seem like a lot but we don't actually publish that many books so it is a LOT for us." And you should read those guidelines carefully; writers and artists looking to submit a story should do so using two and only two of Top Cow's characters, with no other characters included, either company-owned or original to the story. Artists, meanwhile, can request a sample script. It doesn't say anything of the sort in the guidelines, but one would think that's a wise move for writers, as well, to get a sense for how full a script Top Cow is looking for. Also, just saying: Don't be a pain in the neck. No submissions are being considered until after the submission window is closed, apparently, and you can be blocked and/or disqualified for being too aggressive and driving the small staff at Top Cow crazy with too many inquiries about the status of your piece. Check out the full guidelines at the link above, and good luck!