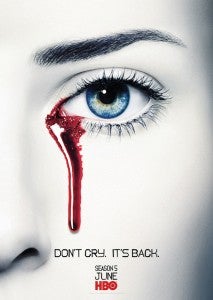 "Don't cry, it's back," declares HBO in a new, 30-second spot for the upcoming fifth season of their hit series True Blood which will begin airing on June 10. The ad, though, is a hilariously awkward and unsettling montage of numerous characters crying (including, of course a fair number of blood-crying vampires). The tagline matches the one seen on the poster at right, which has been floating around for a while now. whose eye that is, or if it's just a generic model for the poster, is unclear. The upcoming season, which promises more intrigue among the vampire "government," will launch just two weeks after the beginning of a new ongoing series of comic book adventures featuring Sookie Stackhouse and company, which launches Wednesday from IDW.