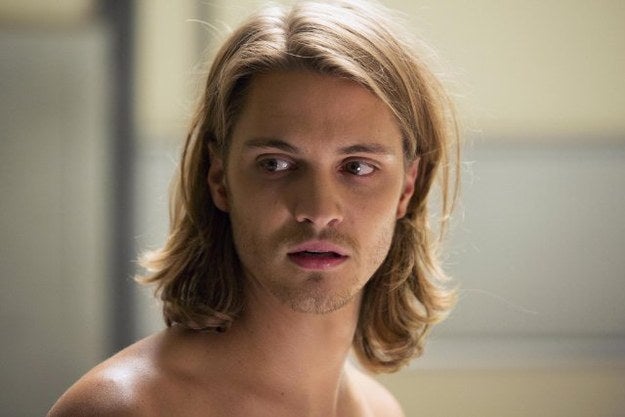 Warning: Spoilers ahead for the ongoing seventh and final season of HBO's True Blood.

With Grimes heading off to film Fifty Shades of Grey, most fans and reporters didn't really question his decision to leave True Blood which was, after all, almost over and where he played a fairly small role last year.

The move was chalked up to creative differences over the direction of the character in a report by TVLine, which seemed odd, but also generic enough to provide cover if the real answer was something like "I hated the new scripts."

In a new revelation, though, Buzzfeed reports that a source close to production has confirmed Grimes left the show because James will enter into a romance with Lafayette this season, and Grimes was uncomfortable portraying a character in a homosexual relationship.

The relationship hasn't yet happened, but the season premiere certainly dropped some none-too-subtle hints...and a trailer for the rest of the season featured Lafayette telling Sookie that he, too, deserved love -- a scene fans assumed depicted him defending himself against accusations of breaking up James and Deborah Ann Woll's character Jessica.

"Luke always had an out clause as a means of pursuing other opportunities which arose in the form of features beginning with The Shangri-La Suite, followed by Fifty Shades of Grey, and most recently, Clint Eastwood's American Sniper with Bradley Cooper," said a representative for the actor in a statement. It had nothing to do with storylines, which he had not been privy to at the time of [the TVLine report]."

"He initially joined the show because he wanted to work with [his Forever co-star] Deborah Ann Woll," that report had claimed back in December. "But when he started reading the scripts for Season 7, he was disappointed to learn that they were going in a completely different direction with James."

Today's report states, "Grimes objected to the first few scripts he received, once it became clear that his character would become romantically involved with Lafayette. He countered that he would be willing to play the role if Lafayette were attracted to him, but not if the attraction was mutual. He also did not want to do any same-sex kissing or sex scenes. The writers were unwilling to change the scripts on his behalf."

True Blood airs on Sundays at 9 p.m. ET/PT on HBO.

Only Murders in the Building Season 2 Gets Poster and Teaser