Ray Wise, who starred as Leland Palmer, the grieving and sometimes raving father of murder victim Laura in Twin Peaks, confirmed for Fangoria today that the rumored promo shoot for which a casting call was issued last week did in fact happen this week in spite of later denials by series co-creator Mark Frost. In spite of frequent rumors that more new Twin Peaks, or another movie, is coming someday, it's expected that the promo in question will be in support of a Blu-ray box set expected in March, which will contain both seasons of the TV series as well as the feature-length prequel movie, Twin Peaks: Fire Walk With Me. The casting call, which was pulled almost immediately after it was posted, called only for a very hot brunette or redhead (no blondes) to play a waitress. "Yeah, we [shot the promo for the Blu-ray] two days ago," Wise is quoted as saying. "It's been done. I don't know if I was supposed to leak that to anybody, but yeah, we did it and I'm not at liberty to say what was done. I can say that it's going to be a big surprise." 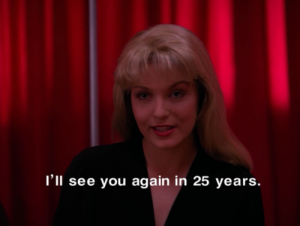 The idea that Leland Palmer, who [spoilers] died during the series' original run, apparently appears in the promo is interesting in that it may indicate that the promo takes place in the dream world where Cooper first met The Man From Another Place and his cousin, who looks just like Laura Palmer. They meet twice in the first season--once, when Cooper looks old and a second time when the Laura-woman tells him, "I'll see you again in 25 years," indicating that the previous dream had been set 25 years in the future and that time in the Black Lodge moves in a non-linear fashion. Nevertheless, many fans have expected that the upcoming 25th anniversary of the series would be a great opportunity to see just what Coop got up to more than two decades later that resulted in his older self being present in the Black Lodge at that time. In spite of his character's death, Wise has made his love for the series known on many occasions, including performing in a loving parody of the show on the Psych episode "Dual Spires." That episode also saw guest appearances from Twin Peaks stars Sherilyn Fenn, Sheryl Lee, Dana Ashbrook, Robyn Lively, Lenny Von Dohlen and Catherine E. Coulson.

Jacksepticeye Explains Why He Won't Return to Twitch

Stranger Things Star Is Hoping for Revenge in Season 5