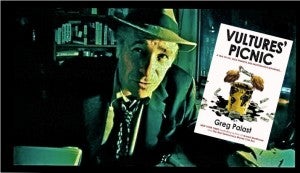 Tomorrow night, famed comics writer Warren Ellis, the co-creator of Transmetropolitan and author of Crooked Little Vein, will present bestselling investigative journalist Greg Palast at the U.K. launch of Palast's most recent book, Vultures' Picnic. The event, which is titled An Evening With Greg Palast: Feasting With the 1%, will take place on at the ULU/University of London and feature Ellis, Penny Red, Anna Chen, Nick Dearden of Jubilee Debt Campaign and John Hilary of War on Want and more. Palast, a correspondent with BBC's Newsnight, is arguably as or more recognizable in the UK as he is in his nativeManhattan, where he operates a non-profit organization dedicated to investigative journalism. Ellis and Palast have never worked together officially (and likely won't in the future--"Greg doesn't need a co-writer," Ellis told ComicBook.com), but are fans of one another's work and have been referencing one another in interviews for years. During my time at the Palast office, every time comic books come up as a medium, Greg doesn't jump to Superman and Batman like most people do; he immediately seizes on Transmetropolitan, or Brian Wood's DMZ, for which he once wrote an introduction. The reporters at the heart of those books are Palast's superheroes. Ellis joined ComicBook.com to speak briefly about his perception of Palast's work, and what he's doing as the headliner of an event with the author before the two ever meet face-to-face. How did you come to know Greg Palast's work, and then Palast himself? Never met Greg. Back in the Nineties, someone put his work in front of me and said "this is as close as we get to the real Spider Jerusalem." Probably not a great compliment to Greg, but still. At some point after having read about your first reference to Palast at a convention years ago, I remember hearing that Greg may have been one of the reporters who inspired the "monstering" bit in Transmetropolitan. Any truth to that? None at all, I'm afraid. I'm pretty sure I picked up the term from a feature on or by John Sweeney, a British investigative journalist. The name may ring a bell: he got fairly well roasted by Scientology a few years back, after a career shot through with events like being smuggled through Zimbabwe in the boot of a car to interview an opposition politician. Aside from hosting the event in London, you've also got Gun Machine coming out from Little, Brown, who've got Rucka and Swierczynski as well. And Palast is doing comics. Do you feel like the walls between traditional book publishing and graphic novel publishing are eroding, or does it just seem like it when you look at it just right and squint? Well, as I'm sure you know, Greg and Duane started in novels before adding comics to their portfolios. But, honestly, this perception is nothing more than short memories. Neil Gaiman migrated from comics to novels pretty much full-time, and Chris Claremont wrote some successful novels in the '80s. Peter David's been living in the space between for decades. Michael Fleisher wrote a novel in the Seventies. Harlan Ellison and Samuel Delany, to name but two, dabbled in comics after establishing their prose careers. When agent Julius Schwartz moved into comics in the mid-century, he brought prose writers like Alfred Bester and John Broome with him. And I'm just skimming here, leaving many names unmentioned -- the supposed wall between the fields has always been pretty porous. Hell, Mickey Spillane came from comics. And have you had a chance to read Vultures' Picnic yet? I'm about two-thirds of the way through it now, just carried along by the drunken swing of Greg's prose. It's a joy to read.