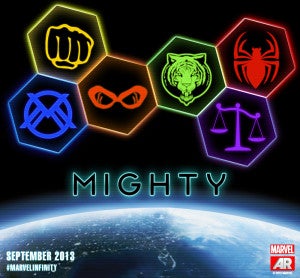 Two more--final--characters, both young heroes on the rise, have joined Luke Cage's "mighty" team spinning out of the Infinity event. From the battlefields of Infinity comes a new team to protect Earth! With the Avengers light-years away in space, contending with the Builders, and Thanos' marauders ransacking the Earth, doing as they please - who will stand in defense of mankind? The White Tiger, a character familiar from the Ultimate Spider-Man cartoon and in Young Avengers, "is ready to step up and take her place as a full-fledged individual hero or a hero in training," says Marvel Senior VP – Executive Editor (and Infinity editor) Tom Brevoort in the Marvel AR video you can unleash by checking out the image at right. So is Power Man, Victor Alvarez, a young character who first appeared during Shadowland and a protege of Luke Cage and Iron Fist. Brevoort says the character "will get a chance to show what he's made of in a big way as these characters come together as Infinity washes over the face of the Earth." So...still no name for the team, but now a complete lineup...!