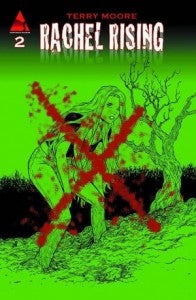 Besides I, Vampire and Justice League Dark coming as part of this week's DC Comics New 52 haul (I'll have reviews of those live soon), there were a couple of very notable horror/supernatural titles that his stands this week at comic shops all over. Terry Moore, the visionary graphic novelist behind not only the sci-fi adventure Echo but the crime/romance epic Strangers in Paradise, released Rachel Rising #2 this week. His third ongoing series began back in July but ships every six weeks to accomodate Moore's elaborate and family-run production and distribution. An interview with Moore about the second issue will be forthcoming here at ComicBook.com, but suffice it to say this issue really upped the ante. Rachel Rising #1 was a tense and clever, beautifully-rendered comic if a little slow. Rachel Rising #2 has no such problem, certainly, although the events seem to be getting stranger and more inexplicable. Rather than focusing on Rachel as a single character, as was done in the first issue, #2 introduces us to various denizens of the town of Manson and really fulfills the promise that Moore made on the Panel Discussions podcast about Rachel Rising being a little bit like Twin Peaks. The pace is picked up along with the repercussions; the mysterious, apparently-supernatural woman who stood atop the bluff at Rachel's resurrection in the first issue appears again, this time with a deadly fallout for someone who appears at first glance to be fairly innocent--or at least not guilty enough to justify what happens. Meanwhile, Rachel turns to her aunt for help in finding her attacker, only to find that nobody, even her own family, really seems to believe that she's really Rachel. By the end of the issue you're left with a lot more questions than answers, but the excitement is palpable and the book reads very fast. More is happening here than in an arc of most mainstream superhero books, but Moore's audience is small and rabid so he's less prone to resetting the board every few months. I'd get on board with this one sooner than later, before you miss a lot of strong storytelling. 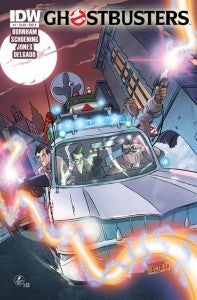 Less spooky,but infused with many more uneasy spirits, is the first issue of IDW's ongoing Ghostbusters series. Along with Godzilla, it's ben the cornerstone of IDW's burgeoning licensed-property empire and in spite of launching on the same day as 13 new #1 issues from DC there's little chance of such an iconic and beloved property getting lost in the shuffle. Both the lead story and the brief backup are thoroughly entertaining, and told in such jarringly different art styles that it's hard to believe they both take place in the same universe. Still, at first glance it doesn't seem as though the backup feature (which revolves around former EPA Agent Walter Peck working for the City of New York to award paranormal management contracts and oversee the performance of city contractors) will have a whole lot to do with the lead feature, which sees the Ghostbusters up against a (very) familiar foe who seems to have gotten a pretty serious upgrade in terms of power and mean disposition. Considering that both Peck and references to Janosz Poha (the museum curator from Ghostbusters 2) anchor this story firmly in the canon of the films, one is left with the obvious question of whatever happened to Dana Barrett. There's not even a hint of her here, and Peter Venkmann is referred to repeatedly as a shameless womanizer, which obviously negates the "he was meant for her" thread that ran through the first two films as it regards Peter and Dana. It's possible, though, that they're just saving her for a future story. You don't want to try and force too many familiar faces into your newly-established ongoing or you run the risk of looking like you're trying too hard. The DC relaunch titles, in fact, have taken this lesson to heart, with mostly positive results. The dream sequence for Ray Stantz that opens the issue is terrific; it's funny, clever, full of references and sets up Ray's "spirit guide" to be Jake Blues, the character played by John Belushi in The Blues Brothers. After starring with Dan Aykroyd (who played Ray in the Ghostbusters films) in The Blues Brothers and a number of other project, Belushi was meant to have a role in Ghostbusters, but it never happened. Putting the pair together here is a funny, in-jokey way of giving Ray his own version of Jesse Custer's John Wayne. It also sets up a long-term conflict for the Ghostbusters right away that goes beyond the ghost of the month, as Egon becomes concerned that Ray's dreams are premonitions and immediately starts trying to analyze him in the lab. A lot is set up here, but none of it feels incomplete except the cliffhanger; it's just right for a first issue. Rachel Rising #2 (Antarctic Press): A Ghostbusters #1 (IDW Publishing): A-

Who You Gonna Call? A Big Week For Supernatural Comics