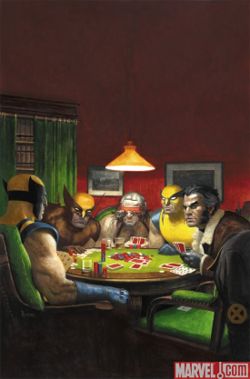 has announced a special event with several of their comic books in honor of Wolverine's 35th anniversary. The timing of course couldn't be better, because in addition to celebrating his 35th anniversary, Wolverine will also soon be featured in his very own major motion picture. X-Men Origins: Wolverine is scheduled to open in theaters on May 1, 2009. In celebration of Wolverine's 35th anniversary, several Marvel comic books will feature Wolverine Art Appreciation Variant Covers in April. The entire month of April will be known as Wolverine Art Appreciation Month. This means Marvel will have plenty of Wolverine inspired covers in comic book stores leading up to the big Wolverine movie premiere. Marvel's previous variant cover programs have featured everything from villains to zombies to monkeys. During Wolverine Art Appreciation Month, select Marvel titles will feature variant covers showing Wolverine through lenses inspired by some of the world's greatest artists. These reminiscent covers are done in the styles of Pablo Picasso, Salvador Dali, Andy Warhol and more. "This is a huge year for Wolverine as he proves why he's arguably one of the most popular characters in the world," explained Joe Quesada, who is Marvel Comics Editor-in-Chief. "He's not just popular with fans but also with artists, as evidenced by how many of today's top comic artists jockey for a chance to draw him. This got us thinking: what if Wolverine had been around for hundreds, if not thousands, of years? What great, classic artists would want a crack at drawing a Wolverine cover?"