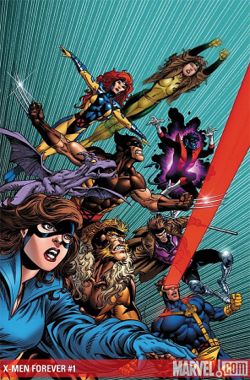 When Chris Claremont stepped away from most of his association with the X-Men in the early 1990's he left behind a legacy that few writers of any comic book series could match. With storylines such as the Dark Phoenix Saga and his assistance with the start of books like Excalibur, it's safe to say that the current and future X-Men stories will always owe a debt of gratitude to his creative touch.

Having said that, the current world of mutants looks very different today from those early 90's images. With a much smaller membership, a new base city (San Francisco) and an extremely uncertain future, and present, does Claremont's return to the X-Men with X-Men Forever #1 serve as a welcome departure from the current chaos, or is a letdown?

SPOILER ALERT!! PLOT DETAILS OF THIS ISSUE REVEALED BELOW!

Issue one picks up after the X-Men have survived their battle on Asteroid M with Magneto, which took place in the first three issues of the X-Men series launch in the early 1990's. Instead of continuing in the current, 2009 continuity, this series explores a world where Magneto did not survive the battle and where humanity may mistrust mutants even more than they did before.

Our issue begins with questions; questions over the location of murderous Acolyte Fabian Cortez, who was key in Magneto's destruction, and questions from characters such as Gambit, Wolverine, Shadowcat and Nightcrawler about their own futures and thoughts regarding the other team members. Should Jean and Wolverine fully explore their feelings? Should Shadowcat stay with the X-Men? Should new member Gambit fully trust this team of outcasts? All interesting ideas that will hopefully be explored in future issues.

After the Blackbird is unexpectedly shot out of the sky, the team, Cyclops in particular, finds itself ambushed by Cortez, who uses his power to amplify Cyclops' optic beams to deadly, unrestrained power. A pretty intense battle ensues, with Wolverine, Rogue and Storm shouldering much of Cortez's damage, and the book delivers some decent action right away instead of being too heavy on exposition, but a couple of characters, Jean Grey in particular, seem unnecessarily wordy right away, even in their own thoughts. This is a battle after all!

Claremont, however, does an effective job with Cortez, fully showing us the ruthless and violent mutant he is, especially when he attacks Jean, Wolverine and Shadowcat, who more or less missed the first round of beatings. The lack of regard Cortez has for his victims is captured in Claremont's words.

Nightcrawler and Gambit arrive to save the day and manage to defeat Cortez, much to Cortez's surprise!. A jangled team returns to Professor X, only to be informed by Nick Fury that the days of their unsupervised adventuring are over and that SHIELD would be helping to oversee their work, all in the name of "public safety". This scene goes on a bit too long, and the phrase "save the world" is uttered two times too much during Cyclops' rebuttal to Fury's insistence that they need supervision, especially in the face of how much humans now fear them.

The issue does end with plenty of intrigue, as Jean and Logan communicate telepathically about perhaps a bit more than just the general "how are you dealing after this terrible, almost fatal battle". In that instant, Jean senses a terrible attack on Logan, with the intruder to be revealed, hopefully, in two weeks in X-Men Forever #2.

Overall this issue is worth checking out, if nothing else for seeing a different, yet familiar, team of X-Men. Some characters are given dialogue and contributions that seem a bit forced, such as Shadowcat's inner thoughts on the tension between Storm and Rogue at the end, and perhaps that will smooth over as the series gets more into a rhythm with the plot and character dynamics. The issue is definitely Claremont in several places, and it's intriguing to see what he will do with this book since there's no threat of repercussions in the current X-Men continuity.

It's a first issue worth giving a read! The interplay of the characters, and Cortez's presence, are what makes the issue a title to throw into your stack of Wednesday purchases this week, despite a couple of places of shaky footing.