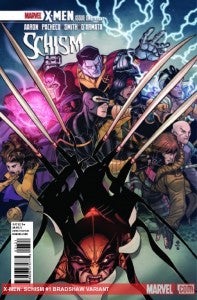 The past has been building to the present, and the events that surround the X-Men, and mutant kind in general, are about to take a decidedly more drastic direction. They've lived through decimation, deaths, vampires and more of late, and now the X-Men are on a road that could define the team and the series for years to come. As with many things, it comes down to which side you're on when faced with a difficult and character-defining situation, and with that two men who have seen it all, and driven each other crazy in the process, are at the center. Schism promises to address the Cyclops/Wolverine tensions that have been flaring and ebbing over the years, and these two characters have a complicated history to explore. The first issue of this event series gives us a good dose of that tension coupled with an interesting set-up to explore the possible breakdown of a historic and central team. Schism #1 opens up with a bit of a snapshot of where the mutant population currently is in the minds and fears of a world. Wolverine and Cyclops are quickly off to a gathering of world leaders where Cyclops is scheduled to speak on the matter of dismantling Sentinels, the mutant-destroying robots that have plagued the X-Men and mutants in general for years. He is met with opposition, as well as an attack by Quentin Quire, known as Kid Omega. What follows is an interesting and slightly disturbing scene in which Quire launches a telepathic attack on the assembled politicians, and Cyclops now trying to do damage control for a newly panicked world and Wolverine wondering about Cyclops' decisions. Writer Jason Aaron does an effective job of pacing the story, slowly building up the different views between Cyclops and Wolverine as a new wave of panic towards mutants sets off a chain of events where the Sentinels are once again running amok and fear is at a new high. While not much between Wolverine and Cyclops is said at this point, the last few pages give a strong sense as to where we can expect to see these two draw lines with each other. The tension bubbles just under the surface, and the pencils of Carlos Pacheco add nuances of emotion and feeling to the body language of the central figures, a nice touch to some effective storytelling. The issue also introduces a new character in the form of Kade Kilgore, a demented and evil child genius who joins up with a villainous group from the X-Men's history. His role in the story promises to be exciting and unnerving all at once. Schism promises to be an explosive, character-driven arc with a lot on the line. It will be interesting to see what direction Aaron goes in as the team must choose between two strong, determined and hard-headed men. If this first issue is any indication of that direction, then the course is one that is worth following!