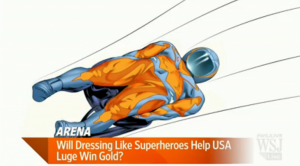 had a NASCAR endorsement, and now X-O Manowar, Valiant's flagship comics title, will be branded onto the uniforms of the U.S. luge team. The report comes via a video blog from the Wall Street Journal, embedded below.

In exchange for funding estimated in the low six figures, Valiant gets mainstream exposure outside of the comics direct market. "They want to spread the word with their characters and their properties," said a WSJ analyst, noting that Valiant is also heading to Hollywood with some properties for development. They say the suits will be unveiled next month at the Luge World Cup, and that as far as they know, this is the first time a U.S. olympic team has embraced this kind of marketing relationship with a publisher.

"There's always a psychological component of looking good and feeling fast, and I think the sponsorship's going to help the team in a couple of ways," said Gordy Sheer, a former medalist in the sport currently working for the team as marketing director. "They'll look good and they'll feel fast but also Valiant is helping the team with financial support. We're a small sport and every bit of help we get is absolutely meaningful and directly impacts our ability to perform."