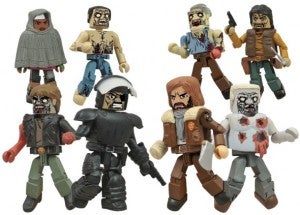 The upcoming fourth wave of minifigs based on Robert Kirkman's popular Image Comics/Skybound series The Walking Dead are coming to Toys "R" Us, Diamond Select Toys announced today. At right is the Toys "R" Us-exclusive assortment, which features six brand-new figures based on the artwork of series artist Charlie Adlard. Based on the Prison vs. Woodbury storyline which served as the basis for the third season of the AMC TV series, the assortment includes new figures of Rick Grimes, the leader of the main band of survivors, and the Governor, the sadistic ruler of Woodbury. Both depict the characters as they appear towards the end of the storyline, bearing the severe injuries inflicted upon them by the Governor and Michonne, respectively. Both figures are exclusive to Toys "R" Us, and each comes with his own exclusive walker, the Gunshot Zombie and the Biker Zombie, respectively. Also in the assortment are the sword-wielding Michonne (in her poncho) and a pre-conflict figure of the Governor, both of whom are also available in the specialty store assortment. However, at Toys "R" Us their specialty pack-in figures (Woodbury goons Gabe and Bruce) have been replaced by two new, exclusive zombies! Michonne comes with the Crawling Zombie, who has a lower body piece that allows him to drag his severed torso along the ground, and the Governor comes with the Jaw Zombie.