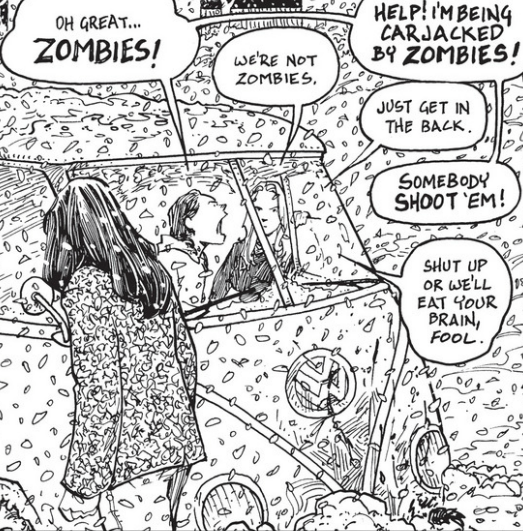 Two years ago almost to the day, Robert Kirkman's The Walking Dead, a comic book series published by Image Comics and Skybound Entertainment (and the basis for the hit TV series which has its fourth season finale tonight) shared a preview of Terry Moore's Rachel Rising with his readers in the pages of the veteran series' ninety-fifth issue. The practice wasn't uncommon for Kirkman or Image at the time; The Walking Dead, just starting to really catch fire on TV, was going from a hit in the context of the creator-owned comic book industry to an unmitigated phenomenon as the show's second season got everybody talking, and so Kirkman was using valuable real estate in the back of his comic to promote Image Comics titles he believed in. John Layman and Rob Guillory's Chew got such a treatment, and it helped make the book one of Image's most-read comics. But Rachel Rising wasn't an Image Comics title. Moore self-publishes, and always has. So...what made it a title that Robert Kirkman felt the need to show some love? 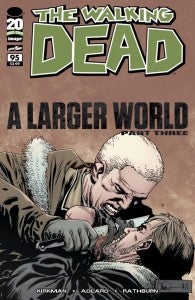 "Terry is a personal hero of mine dating back to my self-publishing days," Kirkman wrote in his introduction to the preview. "I've always been a fan of his work and an admirer of everything he's been able to accomplish independently." It worked out nicely for all involved, then, that Moore took on the first horror comic of his career at a time when Kirkman's own horror comic was being showered with awards and seeing a massive uptick in sales. Moore's presence in The Walking Dead also got him a bunch of press attention that a small book would ordinarily not have received just on the strength of the novelty of it: again, this was a publisher working hard and shelling out some money to promote a book by another publisher...because he enjoyed it personally. Moore's Strangers in Paradise remains one of the most important American comic books of the last twenty years and won a slew of awards; it's still taught in college classes today, ranging from creative writing and graphic novels to social issues and human rights. His follow-up, Echo, was a dense and clever science fiction story that established his titles all exist in a shared universe (even though the three that he's written so far are so wildly different that the connections are at times pretty tenuous). That's a concept that's been played with a bit in Rachel Rising, especially as it pertains to a mysterious box that has belonged to the title character for hundreds of years (long story)...but which somehow ended up in the possession of Echo's Julie, too... In Rachel Rising, Rachel wakes up at sunrise on a shallow grave in the woods and discovers the freshly murdered body in the dirt is her own. With events of the previous night a blur, Rachel seeks out her boyfriend Phillip. But Phillip has a new girl now and Rachel is beginning to suspect she rose from the grave for a reason… revenge! 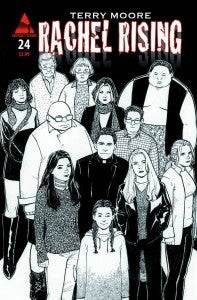 Rachel Rising is one of the best-reviewed and best-loved horror comics on the market, with an Eisner Award already under its belt a couple of years into its run. Speaking of which... Recently, when Moore mentioned on Twitter that he might shutter the book around issue #30 (that would be the end of the next arc; Rachel Rising #24 came out this week and wrapped the book's first mega-arc), there was a fan outcry. #SaveRachelRising made the front page of nearly every comics-news site in the industry, with high-profile creators speaking out in favor of the book and encouraging their readers to check it out. Joe Hill @joe_hill (Locke & Key, Wraith) tweeted "Time to #SaveRachelRising. Guys, if you don't read @TerryMoore, you aren't reading one of the best writer-artists in comics." Fábio Moon @fabiomoon (Casanova, Daytripper) tweeted, "If there's ONE reason I read comics on the iPad, it is so I'm able to follow @TerryMoore 's Rachel Rising. Go find out this amazing story." The next issue, due out in early May, is the best jumping-on point since Kirkman's preview of the first graphic novel ran in The Walking Dead. Having worked out a solution to the biggest threat of the first 24 issues, Rachel and company will be returning to the small matter of who actually killed Rachel in the first place. You can check out the series on ComiXology. And, soon, it's expected to be a TV pilot from producers who previously worked on projects like Watchmen and (of course) The Walking Dead. Here at ComicBook.com, we run a regular feature with Terry Moore; shortly after the publication of each new issue of Rachel Rising (we don't get to see it early; Moore doesn't do advance readers), we talk with the writer/artist about the issue, its ramifications for the larger series, and the craft behind creating it. Generally, they're quite interesting. You can find them all here.