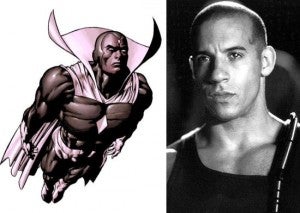 and Fast & Furious star Vin Diesel has confirmed that he's meeting with Marvel Studios for an as-yet-unknown project. "Marvel has requested a meeting," Diesel posted as a Facebook status earlier today. "No idea what for...haha, you probably know better than me." What could it be? Rumors (or fancasting) in the past have had Diesel attached to Luke Cage, The Vision, Rocket Raccoon and probably others we haven't seen. Meanwhile, if it's true that Marvel plans on Doctor Strange being "the Iron Man of the future," a major star who helps drive the next generation of Marvel films, getting an A-lister like Diesel might go a long way toward that objective. The Vision is probably the rumor that got the most traction, after last year Diesel himself posted an image to his Facebook account in which a fan had photoshopped the character's costume onto the star's body. At present, the only characters confirmed to be added to the upcoming Avengers sequel are Quicksilver and Scarlet Witch, although with an Ant-Man movie coming up and Marvel putting so much into promoting Hank Pym and his amazing robot friends in the comics, The Vision and Ant-Man might not be that unlikely to appear in The Avengers 2.