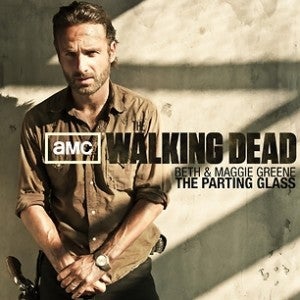 Following last night's record-breaking season premiere, Emily Kinney and Lauren Cohan's "The Parting Glass" (as heard around the campfire on AMC's The Walking Dead) is available for download at iTunes. Kinney is a musician outside of the context of the show, which raised flags with a lot of viewers last night, assuming the song might turn up as a studio recording after she was singing it on the air. The song is a cover of the Wailin' Jennys Irish folk dirge and is being promoted as having the same mournful quality as the series' third season.

The Walking Dead: Beth and Maggie's Song For Sale