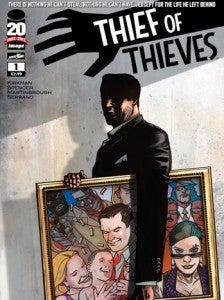 During a panel at MorrisonCon earlier today, The Walking Dead creator Robert Kirkman revealed that one of his other creator-owned property, Image's Thief of Thieves, is currently in the script-writing stage at AMC, with Charles Eglee of Dark Angel fame doing an "amazing job." The series, which was sold to AMC back in April, is not yet committed to a pilot, but will likely go forward once the script is completed. Kirkman isn't counting his chickens yet, saying only that it "may" progress beyond the script stage, but given the massive success of The Walking Dead for AMC and the fact that they'll soon be without Breaking Bad, it stands to reason that at least giving another Kirkman property a chance is the sensible move. "AMC recognizes the limitless ideas generated by the comic industry," Kirkman said of the sale back in April. "Their dedication to bringing The Walking Dead to life as a TV show has been key to its success and I'm excited about the potential of Thief of Thieves to reach similar levels of success." The series, which is published through Kirkman's Skybound imprint at Image and has utilized the talents of a number of writers and artists under Kirkman's steady eye, revolves around a career thief who has retired from bilking innocent people--but continues to steal from other thieves. Think of it as My Name is Earl meets Dexter. And now, quick! Try to unthink that thought. You can't, because it's too awesome. That's why between now and when the next TV update happens, you should be reading Thief of Thieves.

The Walking Dead Creator's Next TV Show Still in Development