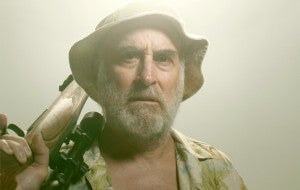 Fans curious as to why Dale Horvath, one of the lead characters in AMC's The Walking Dead who was killed during the show's second season in spite of the fact that his comic book counterpart lasted for nearly 80 issues, can stop wondering: it was done to remind viewers that the zombies are still a threat. At a panel in Los Angeles yesterday, The Walking Dead executive producer Glen Mazzara reportedly told the audience that the show had begun to feel "safe" and needed a zombie death to shake up the status quo. "Dale was the only worthy sacrifice; people would see Shane's death coming but no one would see Dale's death coming," he's quoted as saying by The Hollywood Reporter. At the same panel, series creator and writer Robert Kirkman teased that even though Dale didn't die the same way he did in the comics, doesn't mean that (fan-favorite) death scene is lost to the screen forever. While it may not be Dale's epic ending, Kirkman says that he's already starting to shuffle events between characters to suit the needs of the TV series. "There will be cases where something memorable like that will be displaced and given to somebody else," Kirkman said (Dale's leg was cut off and eaten by cannibals who intended to kill him slowly, until he told them that he had been bitten and now they were all going to die). "I'll hint that that actually happens in our first episode back in Season 3 -- there's something memorable that happened to a character in the comic is happening in the show in our first episode back and it's not the same character."

The Walking Dead: "One for the Walkers."