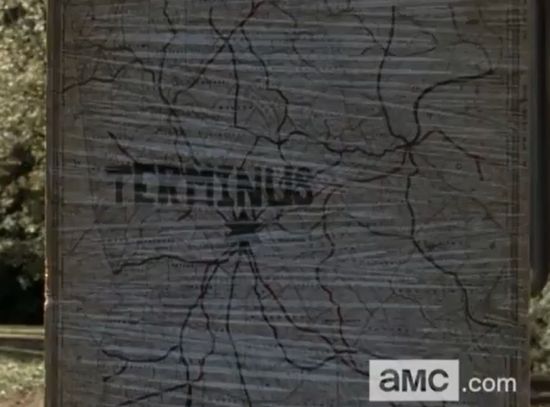 On the "Alone" episode of The Walking Dead, Terminus once again played a big role. Maggie, Sasha, Bob Stookey, and Glenn became the latest to find the Terminus signs and start their journeys toward this mysterious place. Tyreese, Carol, Lizzie, Mika, baby Judith, Rick, Carl, and Michonne are already headed toward Terminus. But what will they find when they get there? Will Terminus be a magical place or is it a trap? In a new AMC video called Inside Episode 413: The Walking Dead: Alone, Walking Dead creator Robert Kirkman shares his thoughts on Terminus. "The big unknown of the back half of Season 4 is what is Terminus," said Kirkman. "What will it be if they actually end up making it there? It could be something fantastic. It could be something absolutely terrible. I'd put my money on terrible. But you know what? We like to keep you guessing, so you never know." Of course, Kirkman is probably in a better position to know exactly what Terminus is than anyone else. If Kirkman is willing to put his money on it being terrible, then it's probably a safe bet that the experience won't be fantastic for those who arrive in Terminus. The Walking Dead airs on Sunday nights at 9 PM ET on AMC.

The Walking Dead: Robert Kirkman Would Put His Money On Terminus Being Terrible

Everything Coming to Tubi in October 2022

In the Soop: Friendcation Trailer Released by Disney+