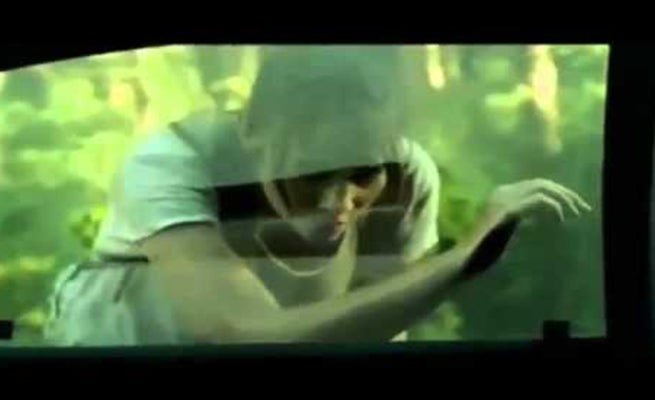 We start out with Maggie teary eyed, wiping her eyes in the woods. A walker creeps up from behind and she waits until its just behind her to stand up, pull it close, and stab it in the head. She sits back down and cries, again.

A hand digs through the dirt, collecting worms. It's Daryl, who eats it. His equipment is scattered around him on the ground. Then, Sasha explores a path in the woods. She stops and analyzes the dirt, seemingly looking for water. Dead frogs are scattered in front of her. She notices and is intrigued. She kicks dirt with her foot and buries one. Maggie and Daryl approach from the side and she gives them a negative indication with a head nod. The three leave the woods.

The group's truck runs out of gas. Rick tells them they'll walk, so they do. They look weary down the street, Rick carrying Judith. They ignore an approaching group of walkers because "they're not at their strongest." Rick talks to Daryl about Atlanta, "it's been 3 weeks." Daryl deflects and tells Rick Judith is hungry. Rick is optimistic for finding food and rain. Daryl branches off to find food and attempts to deny Carol's self invitation to tag along, but she goes anyway.

Carl shares a music box with Maggie. Father Gabriel, lagging behind the pack, tugs at his priest's uniform. He tells a story about shirts the church used to make and how they are intended for atoning for sins. Maggie tells Gabriel her father was religious, then shuts down his attempt to get her to open up. He tries to comfort her and she is defensive and accusatory- telling him he hid when his people needed him. The group continues down the street in the hot sun.

Michonne and Sasha observe the trailing walkers. Sasha wants to kill them, but Michonne tells her it's not worth it. Michonne compares Sasha to her brother but Sasha insists they are not the same and never were.

Carol and Daryl explore the woods. Daryl says it's too dry, nothing is there and Carol advises them to start back. Daryl wants to stay, alone. Carol starts about Beth saving their lives and gives him Beth's knife. She reminds Daryl he is not dead. She tells him she knows him and he has to let himself feel, then brushes his hair aside and kisses him on the forehead, then heads back to the group.

Rick and Glenn observe woods from a bridge. The group is spread across the bridge. Abraham nods for Rick to go forward with an apparent plan. Walkers approach. The group backs away and leads them over the end of the bridge with ease. They've gotten good at this. One last walker approaches and Sasha grabs it, looks at it, then kills it. They abandon their plan and start killing walkers one by one. Michonne advises Sasha to leave, but she won't. Daryl saves Rick from getting bit. Michonne then pushes Sasha to the ground. Sasha stares down Michonne and walks away.

The group, all together again, walks down more road. Carl tells Rick to look ahead at some cars. Daryl goes exploring in the woods again. Maggie wipes the window of a car and opens the door. She searches the inside and only finds papers. The keys are in the ignition. She takes the keys and opens the trunk to find a woman tied and bound and now a walker. Maggie closes the trunk and walks away, bothered. She goes back to the trunk and tries to get the keys out but can't. She draws her gun and aims it at the key hole. Glenn grabs her and she explains that there's a walker inside. Glenn tries twisting the keys and gets the trunk open. He finds the woman inside and puts her down. He picks up his gun, gathers Maggie, and leaves.

Daryl continues through the woods. He drops to his knees before an emaciated deer with its spine showing. He sees a dead walker with its blood spattered against the tree it is resting on.

The sun continues to beat down on the tired group, which is now resting on the side of the street. Daryl rejoins them. Abraham opens a bottle of liquor and starts to drink it. Rosita, Eugene, and Tara talk about alcohol making things worse. A pack of dogs comes out of the woods and barks at the group who is hesitant to make a move. Sasha puts them all down with her silenced rifle. Rick takes a stick, breaks it over his knee. The group cooks and eats the meat of the dogs. Noah stares at one of their collars. Sasha can tell Noah is bothered. Noah tells Sasha he tried to help her brother. He says he doesn't know if he'll make it, and Sasha tells him he won't. Then adds, "Don't think, just eat." Father Gabriel takes off his white collar, throws it in the fire, and eats his portion of the dog as Maggie looks on.

The group continues down the hot road, once again. Glenn offers Maggie water but she doesn't want it. Maggie talks about knowing Beth was alive and then finding her dead the same day. She says seeing her like that was harder than before. Glenn does what he can to console her and encourage her to keep fighting. She accepts water.

Glenn continues his convincing as he tells Daryl they can make it together and only together. Daryl ventures off in the woods again. Daryl sits down a few hundred feet from a cabin in the woods and treats himself to a cigarette. The exhaustion is on his face. He looks at the cigarette, clearly thinking, then pushes the lit end onto his hand. He burns himself and has no visual reaction. His emotions take over and he breaks into tears.

Daryl heads out of the woods and Rick hands him a note that says, "From a friend." There are water bottles in the middle of the street. The group analyzes them and Eugene steps up to test it. Abraham knocks a water bottle out Eugene's hand and Rick says "We can't." It starts raining. The group rejoices and tries to catch water in their mouths. Some are happier than others, such as Daryl, Maggie and Sasha. Father Gabriel goes on, "I'm sorry, my Lord." Thunder rings out. Judith cries. Rick insists they keep moving. Daryl tells Rick, "There's a barn."

The group enters the barn, soaking wet and cautiously. Some stay outside while Maggie, Carol, Abraham, Daryl, and Rick check the inside. Maggie finds a room with a walker inside. She analyzes the dead woman crawling before drawing her knife and putting her down. Carol looks over her shoulder. Maggie says that if the woman had a gun she could have shot herself but Carol dismisses that type of talk, saying that people can't give up.

Day turns to night. Abraham continues drinking. Rick and company form a fire in the barn as lightning flashes through the room. Carol tells Rick that Carl will be okay. Rick says that he was worried for Carl growing up, but this way may be easier for them to get used to the world. Michonne claims this isn't the world. Glenn says it might be, and Rick says that this is reality until they see otherwise. It's what they have to live with.

Rick tells a story about asking his grandfather if he ever killed Germans in "the war." His grandfather wouldn't answer, that it was grown up stuff. He says that when he asked if German's ever tried to kill him, his grandfather got really quiet, that his grandfather said if he stepped into enemy territory he was dead. After a few years of pretending he was dead, he made it out alive. "We do what we need to do, and then we get to live." Rick is confident that no matter what they find in DC, they'll be okay. This is how they get by. They have to tell themselves, "We are the walking dead." Daryl dismisses the statement, "We ain't them." Rick agrees. Daryl again tell Rick, "We ain't them," then walks away.

Thunder rings out as Daryl paces near a chained-shut door. He looks outside to find a horde of walkers approaching. He pushes the door shut and tightens the chain. Maggie wakes up first and runs over to help him hold it shut. Then, Sasha joins the effort. Following her- Rick, Carol, Michonne & Glenn. The group does their best to hold the door shut and keep the walkers out. Their feet slide in the mud. Even Carl puts Judith down to help. The music overplaying is intense and it shows what the group is capable as a whole group.

Morning. Maggie opens her eyes and looks at Judith, cuddled by Rick, staring back at her. Daryl sits alone away from the group and Maggie joins him. She tells him he should sleep and that it's okay to rest. They look at Sasha sleeping and mention Tyreese having been tough. Then, Daryl refers to Beth being tough, too, even though she didn't know it. He hands Maggie the music box. Maggie walks over to Sasha and wakes her. Sasha is confused when Maggie invites her outside.

Maggie and Sasha walk outside the barn to find walkers decimated by the weather. Sasha realizes they're lucky to be alive. With the sunrise in the distance, Maggie and Sasha sit together. Maggie tells Sasha she "brought [her] here for this." Sasha admits she doesn't think she's going to make it, but Maggie reassures her that they will. Maggie tells Sasha Daryl fixed the music box, but it's broken. A man approaches them, well dressed and clean.

He introduces himself- his name is Aaron and he says he's a friend. He wants to talk to the person in charge and knows that its Rick. Aaron says he has good news and the music box starts playing.

The Walking Dead Season 5 Episode 10 - Them Recap With Spoilers