Power Rangers Shattered Grid has delivered some genuine shocks throughout the series, but none might be quite as shocking as seeing Kimberly team-up with Bulk.

That's exactly what happens though in the new preview of Saban's Go Go Power Rangers #10, which gives fans a look back into the origin of the Ranger Slayer. After last issue fans know that the Drakkon universe Kimberly saved a group of her former classmates and teachers from Drakkon's forces, and it looks like Bulk has joined the Coinless cause.

The preview shows Kim and Bulk out on patrol, scouting Drakkon's forces in multiple locations. They also reminisce about simpler days, where weird cafeteria food was all they had to worry about. One of the coolest moments though occurs later when Kim learns that Bulk wasn't as dumb as he pretended to be, learning he was quite the fan of history.

"Crazy," Kim says. "You were a history buff pretending to be a big dumb bully..."

Bulk has an observation of his own, saying "And you were a spoiled valley girl who was actually a Power Ranger."

During their journey Bulk takes a moment to thank her for saving their lives a bazillion times without anyone ever knowing, and lifts her spirits when she gets down on herself for their loss against Drakkon.

This new friendship is certainly surprising, and we have to wonder if it is tied to the heartbreaking origin of the Ranger Slayer that BOOM! Studios editor Dafna Pleban teased previously.

"I think ... I don't think you're gonna necessarily see something specific on that line but we're showing how that Kimberly becomes the Ranger Slayer and it's very heartbreaking and I love it," Pleban told ComicBook.com. "So you will see, sort of how she becomes the Ranger Slayer. I think sort of the particulars are less important than the emotional stuff." 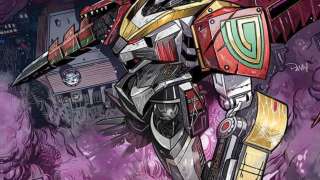 You can view the new preview in the gallery and the official description can be found below. If you're looking for more Shattered Grid, make sure to check out our list of the slickest looking covers so far right here.

Synopsis: The Ranger Slayer has arrived, threatening the future of the Power Rangers by destroying their pasts in service of Lord Drakkon.