Mighty Morphin Power Rangers fans are getting another round of posters for their walls thanks to BOOM! Studios.

The new Poster Book will be illustrated by Goni Montes, and will again feature 20 11 x 16 posters that you can easily tear out and frame, instantly making any Power Rangers collection even grander. 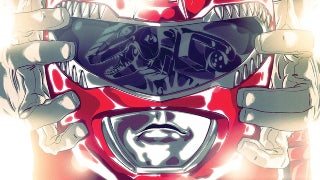 “The response to the first Power Rangers poster book was so tremendous, we knew we had to offer fans more,” said Dafna Pleban, Editor, BOOM! Studios. “We’re always working with Saban Brands to bring fans exciting, new interpretations of Powers Rangers’ iconic character and focusing on Goñi’s art for this new book was a no-brainer. His images helped launched the Mighty Morphin Power Rangers comic book series and are instantly recognizable, so I hope you have enough wall space for all 20 posters!”

The Rangers and Zords theme seems to indicate a bigger focus on the Rangers' arsenal. The first poster book featured the Megazord and Dragonzord, though it was more of a background role (save for one particular poster), putting the Rangers themselves front and center. With this, it seems we might see more of their weapons, command center, and Zords, and hopefully that includes favorites like the Tigerzord, Titanus, and the Thunderzords.

The new Rangers and Zords Poster Book is set to hit comic shops and booksellers like Amazon, Barnes & Noble, and Books-A-Million in May of 2018, and will retail for $19.99.

If you want to get an idea of what you're in for, you can check out our review of the first Mighty Morphin Power Rangers Poster Book, which includes a preview of the images inside.

The new volume is just one more reason why there's never been a better time to be a Power Rangers fan.