Dragon Ball Super is barreling towards an (epic? Shocking? Infuriating?) end to the Tournament of Power - and the entire series, given that there are only about five episodes left. The past week of Dragon Ball Super spoilers have quickly revealed just how the final minutes of the Tournament of Power will play out - and as expected, it will involve the long-awaited final battle between Jiren and Goku.

For that final fight, Jiren will go all-out with his full max power, while Goku will reportedly master Ultra Instinct. We got a an early tease that the final form of Ultra Instinct would look different, and now it seems we have the official first look at what it will be! Check it out below - but only if you don't care about the SPOILER!

Looks like on March 10th they're coming out with a Goku mastered Ultra Instinct figure. https://t.co/AfPAtPEStM


The biggest difference is obviously the shirt, first and foremost! After all the hoopla over "Shirtless Vegeta" in the latest episode, "Shirtless Goku" is looking to come and claim that crown!

Other than that (and on a more serious note), this pic of the final form of Ultra Instinct has a darker hair tint (no gray tips), a more chiseled muscle mass, and an aura that is unmistakeably blue and vibrant, rather than the murkier mix of blues and purple that we originally saw. Since this is a promotional image for upcoming merchandise, we can't confirm whether details like the grey plumes of smoke surrounding Goku are part of the final Ultra Instinct form, or just promotional flourishes.

This form of Ultra Instinct is expected to debut at the end of episode 128 / in episode 129, after the Universe 7 team has suffered its biggest loss yet, triggering an impassioned emotional response in Goku. However, we have little to no knowledge of Dragon Ball Super's final episodes, so there's still the looming question of whether this final version of Ultra Instinct will be enough. 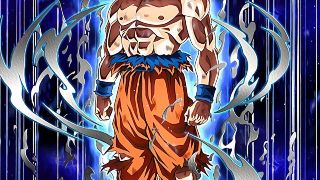 You can check out more Ultra Instinct images in the gallery above!

Neon Genesis Evangelion Composer and Genshin Impact Are Teaming Up

Attack on Titan Sets Up Its Return With New Art of Eren, Levi