Sometimes the most dangerous enemy can come from within, and Jesse is caught in the middle.

Jessie is caught between her father-like guardian Sandor and Kyle, who feels Sandor's gone off the deep end and is no longer the right person to protect her. While Kyle's heart may be in the right place, his judgment is quite questionable, and he will hurt anyone who gets in his way.

As you can see in our exclusive preview of Animosity #14, that includes former friends like Zarza-Morra, and Jesse will not be happy when she finds out what Kyle did, and neither will Sandor.

Despite Kyle's betrayal, Sandor is not going to stop until Jesse is safe, and he'll do whatever it takes to get her back. That can't be good for Kyle's well being. You can check out the exclusive preview in the gallery.

If you're not familiar with Animosity, writer Marguerite Bennett breaks it all down. 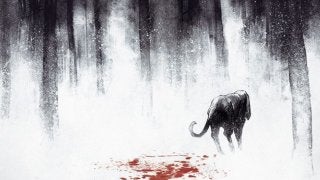 You can find more of our interview with Bennett here, and the official description for Animosity #14 can be found below.

"Betrayal! Jesse is kidnapped by a traitor she trusted and loved. Sandor follows the bloody trail to the dreaded Walled City, where the remains of human civilization reign in terrible power—and attempt to rebuild the world for humans only.