The Animata were just taken out all except for Wintermute, and now the investigation into who pulled off that feat begins in AfterShock's Animosity: Evolution #6.

The new issue tasks Adam and Leila with getting to the bottom of who corrupted the Animata's technology, sending an electrical surge through them that ultimately killed them. Through the grief, it seems Leila has a pretty solid idea of who it was, and it turns out she is right on the money.

As you can see in the new preview, this enemy isn't going to just buckle and go away, so it seems Wintermute and her allies are in for a long and trying battle to take him and his followers down. The good news is that while the other Animata are no more, Wintermute still has a few allies willing to help, including a very angry cat with a pistol. There's a lesson in that folks, which is to never threaten someone with a cat on their shoulder, especially if they access to weaponry.

You can check out the preview in the gallery, and the official description is included below.

"Conspiracies tighten around Adam and his companions as a bloody interspecies gang war explodes in the City by the Sea.

From the brilliant mind of creator/writer Marguerite Bennett (INSEXTS, Bombshells and Batwoman) with artwork by SHIPWRECK's Eric Gapstur-ANIMOSITY: EVOLUTION is an exciting new series that expands upon this already amazing world!" 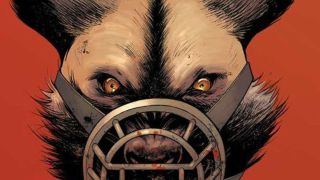 From the brilliant mind of creator/writer Marguerite Bennett (INSEXTS, Bombshells and Batwoman) with artwork by Eric Gapstur--ANIMOSITY: EVOLUTION is an exciting new series that expands upon this already amazing world!"