Readers will soon revisit the world of Vertigo's Incognegro, but thanks to Dark Horse Comics we'll finally learn where Zane's story truly started.

Writer Mat Johnson and artist Warren Pleece return to show readers Zane Pinchback's crusade started in Incognegro: Renaissance #1 from the Berger Books imprint at Dark Horse Comics. The new series is set before the events of the original series and tasks Pinchback with solving a murder that many folks intend to just sweep under the rug.

That's not going to work for Pinchback though, and he'll use his ability to pass for a white man to get to the truth. That process presents many dangers, but Zane is willing to risk it to uncover the killer. The only problem is he doesn't have much to go on, with one of his biggest clues being a watered down manuscript. It might be his only clue too if that party guest won't stop yelling.

You can find an exclusive preview of the anticipated issue in the gallery. 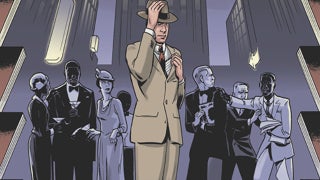 The graphic novel version of Incognegro is available now, and you can find the official description for Incognegro: Renaissance #1 below.

"When a black writer is found dead at a scandalous interracial party in 1920s' New York, Harlem's cub reporter Zane Pinchback is the only one determined to solve the murder. Zane must go "Incognegro" for the first time, using his light appearance to pass as a white man to find the true killer, in this prequel miniseries to the critically acclaimed Vertigo graphic novel, now available in a special new 10th Anniversary Edition."

"With a cryptic manuscript as his only clue, and a mysterious and beautiful woman as the murder's only witness, Zane finds himself on the hunt through the dark and dangerous streets of "roaring twenties" Harlem in search for justice."

"A page-turning thriller of racial divide, INCOGNEGRO: RENAISSANCE explores segregation, secrets and self-image as our race-bending protagonist penetrates a world where he feels stranger than ever before."