The Dark Multiverse is a scary place, but perhaps no one is more disturbing than The Batman Who Laughs, and now you'll find out where he came from.

Spoilers incoming for Dark Nights: The Batman Who Laughs #1, so if you haven't read it yet you've been warned.

First a quick suggestion. If you happen to be picking a comic to read before bed, odds are it should not be this one. Let's say someone writing this happened to make that mistake, and, well, a few not-so-pleasant dreams happened to be the price for that folly.

It's not that the book is overly graphic or violent, mind you, as plenty of other books have walked similar lines. Now, that isn't to say that this isn't either of those things, but those aren't why the book hits so hard. Fans have seen Batman turn evil or an alternate universe Batman be evil numerous times (six times in this series alone), but seeing Batman fall in this particular way is unnerving at times. 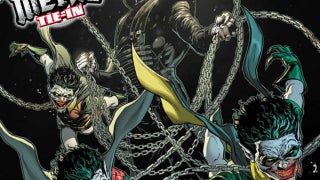 There's one scene in particular where you'll catch a knowing smile, but it won't make sense yet. That happens throughout the issue, and beyond just turning Batman's ethics off, it also turns him incredibly cruel, resulting in some pretty horrible things.

The art of Riley Rossmo fits this storyline perfectly, delivering a version of this beloved character that won't leave your memory anytime soon. Actually, nothing about the visuals here are forgettable, and Rossmo paints a creepy but precise picture of who this character really is.

While this is an origin tale, it does have overall merit to the DC Metal story at large. Writer James Tynion IV does an excellent job of telling a self-contained story that plants two big hooks for DC's big event, and both have significant potential.

Dark Nights: The Batman Who Laughs #1 is not an essential read, but it does exactly what a great tie-in is supposed to do. It tells a self-contained story that adds to the overall narrative of the event it takes place in, and the book delivers on both of those aspects in spades. This is a one-shot worthy of your time and money.

Dark Nights: The Batman Who Laughs #1 is in stores now.

Review: 'Dark Nights: The Batman Who Laughs' #1 Is A Disturbing But Fascinating Tale