With a snazzy new look, a daring new lineup, and a batch of high-profile creators, DC Comics is aiming to make this the summer of the Justice League, and a key part of that equation is superstar writer Scott Snyder, who takes over the lead title in June.

Snyder's last mega-event, Dark Nights: Metal, saw him playing with some characters and concepts from the DC Universe he had never really tackled during his acclaimed run on Batman with artist Greg Capullo. That set the standard that his Justice League series will carry forth, and he told us that the story being released next month is building on everything he has been doing for two years...and then there is at least that long before he runs out of story ahead of him.

"No Justice, to me, is a continuation of Metal, and Justice League is a continuation of both," Snyder told ComicBook.com. "When I was starting Metal, I began a two- to three-year plan where I was really pitching to DC, 'When I finish Metal, I'd really like to take Justice League since it's open, and once that happens, this is the way I see Justice League going. I'm going to need a bridge.' Then we came up with No Justice, to create the big, connective neighborhood of books that we would need to tell the story, but that said, this goes for a good two years. This is really the book for me that, if I had a soap opera, if I have a story that I want to retire on as a superhero story, this is the book."

Snyder says that the fan response to No Justice #1 (and last week's No Justice primer in the DC Nation #0 issue) have been heartening -- if only because the plan is too big and interwoven to turn back, so he's gratified knowing that he is building on elements that have his audience excited.

"The fact that people are responding so positively to No Justice means a lot, because it is one step along the way that we've been trying to pave between Batman, Metal, and now Justice League," Snyder said. "Everything that everyone likes, it's usually encouraging, because all those pieces come back. The Omega Titans that are part of No Justice come back in Justice League. We revisit Barbatos and the Dark Multiverse in Justice League. All kinds of stuff comes back. It's one giant, building story over two years."

Key to that story is the League's lineup, which still features most of the major DC heroes fans have come to expect from Justice League, but adds and subtracts to clear a path for Snyder's big-picture story...and to play to the strengths of some characters who have been somewhat underutilized as the publisher of late.

"The big inciting incident of Justice League is still the breaking of the Source Wall," Snyder said. "Because of what happens in No Justice, everybody has to decide how they want to approach these new giant and crazy threats that are birthed because of what happens with the Source Wall itself. They get a glimpse of how crazy things are going to get, how big, and threatening, and almost wondrous they can be in No Justice and they realize they need to fight a new formation, and because of that cosmic grandeur, and that majesty, and that scope that we're going for in terms of the storytelling between all these Justice League books, it only felt appropriate to bring back J'Onn J'Onzz, the Martian Manhunter, as the core of the team." 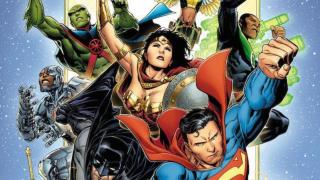 That decision helped to inform the direction that many of the rest of his decisions would take as he crafted the big-picture story for the series.

"It's a driving engine of story in the DCU that's going to sort of culminate in 2019 in a lot of big stuff, so for me Martian Manhunter was the only appropriate lead, both because I want you to look at Justice League and say, 'I remember these characters from when I was a kid,'" Snyder said. "If you didn't read comics and you saw Super Friends, and you saw the Hall of Justice, well, the Hall of Justice is in this. And Martian Manhunter, if you loved the animated stuff -- which I did, the animated stuff if my bible -- well, then this lineup sort of reflects that. But the purpose was never to do nostalgia, or to look back and have it be something that's comfort food. The idea's to sort of the same as it was with Metal, to make you feel like it's comfort food and be like, 'Look at all this stuff you love. The Hawks are back, and Blackhawk Island, and Red Tornado,' and then almost lull you into the idea, to get you in the door. We love these characters as much as you do, so the idea is to acknowledge that, to show you that all the classic stuff you like is there, and sort of reaffirmed and celebrated, and then take you someplace you'd never, ever expect."

Along with Martian Manhunter, Snyder sees his fellow Justice League animated series veterans John Stewart and Hawkgirl as key to his understanding of the title and the future of his corner of the DC Universe going forward.

"Martian Manhunter was always the heart and soul of the team. He connects everybody, literally and figuratively," Snyder explained. "That said, where he's been over the last five years, what he's discovered, and the role that he's going to need to play for the Justice League is something very, very new. Similarly Hawkgirl, to me, is somebody who I loved in the animated stuff, I loved the way she was portrayed in Geoff Johns' amazing stuff, in JSA, and in Hawkman itself, but that said, I didn't want to bring her in just to have people be like, 'I remember that. I love that,' so her story actually connects in a huge way to what happened in Metal, as you know, because of the Nth Metal, Tenth Metal, all that kind of stuff, but what you realize is the way in which it connected, and the reason that she has this connection to this kind of mystical elemental substance plays right into Justice League. Strange things start happening with her. He wings, patterns appear, all this kind of stuff, and they don't know what it is, and so it's a big part of the driving mystery of the year is why is she so important? She doesn't know, and she wants to figure it out. To this story, to this mystery of the source wall."

Everyone has a role to play that is tied to their individual history and mythology, Snyder said, and his decision to bring John Stewart in as the team's Green Lantern is no different, and goes way beyond just his being the guy from the cartoons.

"John Stewart was always adored as a Lantern, for me, and he's been a little bit to the side, and so I wanted to bring him back in," Snyder admitted. "I felt like he was a really great addition to the team, but again, not just to kind of echo the stuff that I loved as a kid, but to say, 'Well, why would he be right?' Essentially something comes from the Source Wall, something lands in issue one that essentially creates a bigger mystery about what the break in that Wall means. What made the Wall? Where'd it come from?...John Stewart, because of what happened to him in Cosmic Odyssey, his background as an architect, the military background, all of it, I think, makes him a perfect foil and a partner with Batman to sort of counterbalance Martian Manhunter in a certain way, and to bring a level of skepticism to the team that I think works really, really well."

"You need somebody like a John Stewart, and a Martian Manhunter, and a Hawkgirl," Snyder added. "They represent a really good triangulation of approaches: Martian Manhunter is very much like, 'We can't let what happened to Mars happen here. We need to discover ways of fixing what we did.' John Stewart is much more like, 'Listen, I've seen this go wrong, and I need to approach this with a very clear, mathematical, architectural mind,' and Kendra, emotionally, she is scared of what she might learn, and at the same time extremely intrepid about wanting to know her place in it. It's a really great triumvirate of characters for me, and the three of them actually wind up having a lot of narrative together. They form a team within the team in a bunch of places throughout the two years where the three of them really become very close."

Snyder is tackling solo hero stories in a way that might feel reminiscent of Geoff Johns's run on Justice League -- an Aquaman arc here, a Superman arc there -- and he hopes that the writers and artists working on the solo comics will want to join him and get in on the fun from time to time.

"My mission with Justice League really, above all, is to both make it the best book on the stands, but the core of it, the heart of it, is to make a book that's connective, that feels like the heart and soul of the DCU," Snyder said. "To me, that's where the book always should be. It doesn't need to be the biggest book, it doesn't need to be the highest-selling book, or anything like that. I mean, obviously we're as ambitious as we can be in those departments, but what matters more to me is you pick it up and it feels like this is a book that connects so much of what's going on in the DCU, and tells a story that's so big and crazy that every few months or every once in a while some of that story will spill into the books that you know and love, based on whether or not the creators want to do that."

Along the way, he explained, characters will begin to see their mythologies deepen and the mysteries surrounding their backstories will tie into the events of No Justice and Metal.

"The first arc really focuses on [John Stewart], and Barry as well," Snyder teased. "With the discovery that once the Source Wall is broken, all these new clues about why, and all these new clues about the nature of our multiverse and what made it begin to appear, and one of those things is a portal, or a permeable membrane, to a whole new area of the emotional spectrum that we haven't visited before: the invisible tangents of the emotional spectrum, the ultraviolets, and the infrareds, and all that stuff, that contains some of the worst and most sublimated hidden emotions that we don't like to admit are there. Barry Allen discovers there's a Still Force within the Speed Force, and more like that."

Justice League #1 is on sale June 6 from DC. The issue is written by Snyder and features art by Jim Cheung and Mark Morales. You can pre-order a copy from your local comic shop or pre-order a digital version from ComiXology. You can see the covers for the first five issues in the attached image gallery.

The Flash: 10 Characters Who Would Be Perfect For the Arrowverse's Blackest Night