Marvel: Crisis Protocol will be adding Thanos next year. Atomic Mass Games debuted the Thanos figure on its Twitter account yesterday, showing off Thanos with the Infinity Gauntlet standing in front of his throne. Few additional details were provided, but Atomic Mass Games noted that Thanos will have multiple arm sculpts (one with the Infinity Gauntlet and one without) and head sculpts, including one with his classic "maniacal" grin as seen in the comics. The Thanos Character Pack will also come with his throne, which can be thrown at characters during the game. The Thanos figure towers over "normal" sized characters, and will have a 50 millimeter base. You can check out a first look at Thanos's miniature in the gallery below.

Marvel: Crisis Protocol is an upcoming tabletop skirmish game that features the heroes and villains of the Marvel Universe. Players will enter each game with a roster of 10 heroes and villains, and then pick out a team from that roster to respond to different scenarios and objectives. Players can utilize Team Tactic cards to create powerful attacks, as well as utilize characters' superpowers during each turn.

While the figures of Marvel: Crisis Protocol are meant for use in skirmishes, they also serve as a great entryway for the miniature hobby. Each figure requires assembly and painting, and are perfect for displays. For instance, Thanos's throne will have a space to place the Thanos figure, meaning that you can show it off on your shelf when you're not using Thanos in the game. 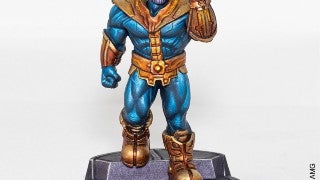 ComicBook.com's Most Anticipated Video Games of 2023