Bullseye #1 debuted this week and it came out with a bang. After being paralyzed, then blinded, and then killed, Marvel's greatest assassin is back in action. The new series written by Ed Brisson, drawn by Guillermo Sanna, and colored by Miroslav Mrva is off to a great start. Well, great if you're not any of Bullseye's victims. He's already racking up an enormous body count with no end in sight as the story heads to South America for a showdown with drug cartels. In any event, if you're a fan of this killer or bad guy comics in general, Bullseye is a series worth checking out.

That got all of us thinking though: What makes Bullseye such an iconic villain? His schtick isn't exactly unique. Some villains have pulled off the perfect aim motif well like Deadshot at DC Comics and some haven't like Merlyn. What sets Bullseye apart in a world of bad guys who are very good with projectile objects? It's nothing as simple as his adamantium skeleton or cool suit. What really makes Bullseye great are the stories he's in. As part of Daredevil's rogues gallery, talented creators have transformed Bullseye from a dramatic assassin to one of the best super villains of all time. If you need to know where to start reading, these are the five greatest Bullseye stories ever.

This isn't just the best Bullseye story ever. This may be the best single issue of Daredevil and the best Daredevil story ever. It's the capstone on Frank Miller's epic run on the series, at least until his return in "Born Again", and it's a fitting conclusion to such an impressive set of comics. The story is a simple conversation between Daredevil and Bullseye in which the former tells the latter the tragic story of a child who committed a terrible crime, all while playing Russian roulette.

Bullseye is locked in paralysis throughout it all only able to watch Daredevil place the gun against his head and pull the trigger. Yet the story perfectly encapsulates their relationship and what each man stands for. The randomness of violence and its chaotic, seemingly infinite consequences are embodied both in the child's story and the game itself. They represent the evil that lies at the heart of this unrepentant killer. Ultimately, "Roulette" reveals why Bullseye is a truly great villain and, in turn, what makes Daredevil such an admirable hero.

At the end of their first series of Daredevil issues, Mark Waid and Chris Samnee revealed that Bullseye was the mastermind behind almost everything that had happened. This took place in spite of his complete paralysis. Locked inside an enormous coffin he guided events precisely simply by envisioning outcomes and issuing orders. It was a new spin that kept everything great about the villain while removing his physicality.

Samnee and Waid took the idea of "aim" to a new level by considering how someone could target not just the physical brain or heart, but a person's life. Bullseye was elevated to the level of mastermind and made all the more fearsome even as someone incapable of physically harming a fly. It was a great twist and one that also led to an ironic and horrifying demise as the series drew to a close.

If you're debating best single issues of Daredevil, it's either #191 (our first entry) or #181. This is the finale of the Elektra Saga and one of the greatest accomplishments in Frank Miller's entire career, and that's really saying something. Miller's run on the series kept pushing Daredevil to his absolute limits and its Bullseye that first discovered what those limits were, even if it was to his own misfortune.

The showdown between Elektra and Bullseye in #181 is masterful. The violence is poetry and blood spun together into perfect superhero comics. Then the following confrontation between Bullseye and Daredevil is almost as good. It also represents a pivotal moment for both characters when Daredevil chooses to drop Bullseye from the rooftops rather than save him. Other comics are pretty good, but this one is magic.

Watch Out For Bullseye

Maybe it seems like a cheat to include a character's first appearance amongst their greatest stories, but this entry is well-deserved. Unlike many beloved villains, say Kraven or Doctor Octopus, Bullseye appeared almost entirely formed in his debut. While Miller and Samnee would add depth to Daredevil's deadliest antagonist, all of the pieces were there from the start.

Wolfman, Brown, and Janson introduced him into the pages of Daredevil more than a decade after the series began with a killer costume. The cover to this book is perfect for its time. Bullseye himself is frightening, especially when compared to The Owl or Stilt-Man. Not only is he deadly and hyper-competent, but he revels in his work. The life of a hitman is an absolute gas to Bullseye and he isn't afraid of The Man Without Fear or anything else that might stand in his way. While others would secure his place in the canon, this first appearance made it clear Bullseye was sticking around. 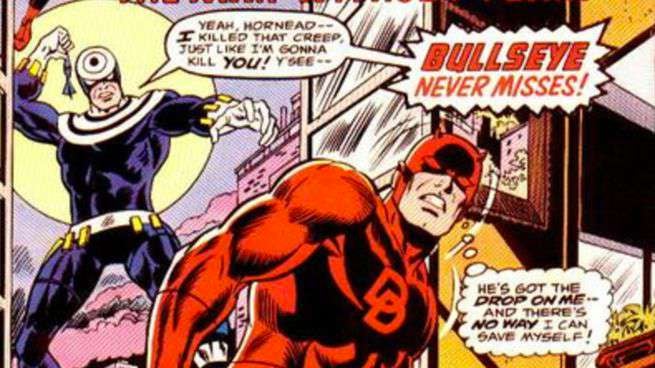 The best was yet to come, but Frank Miller's first Daredevil comic to feature Bullseye certainly set a high bar. This establishes the core themes of both characters in regards to their philosophies on justice, killing, and the social compact. It also does so with a lot of violence and some of the most insane perspective switches of the day.

Bullseye is diagnosed with a brain tumor that causes him to see every living person as a version of Daredevil. His response to this is to start killing every person he sees as soon as he escapes the hospital. If you thought a sane-ish version of Bullseye was scary, then this truly unhinged model is something far worse. "Devils" shows just how deadly and driven Bullseye is, while also laying the groundwork for his most significant relationship.

Hawkeye: The Internet Can't Get Enough of the Tracksuit Mafia