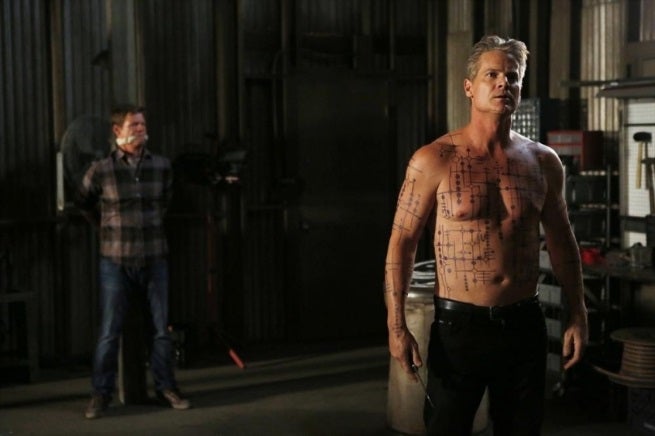 A man and a woman who met at a bar go to the woman's home for drinks. She remarks that it's odd how familiar they seem to each other. The man reveals that they have actually met before, that the woman doesn't remember, but he opens his shirt to reveal the mysterious alien writing. He pulls out a knife to "help her remember."

Coulson is carving into his wall. Skye finds him there. Skye talks about how everything is connected: Ward, her father, the Obelisk, the writing, and the GH 325 serum. Coulson reveals that the urge to write has been coming more and more often.

May is in the Skye, searching for Ward. Senator Ward has covered up Grant's escape, so the public is unaware. Trip spots him in an airport, but May tells him to standby. Ward pulls a bag with money, a phone, and other supplies out of a locker. Coulson says the Senator wants Ward aive, but to otherwise bring him in by any means necessary. Trip spots C4 attached to Ward's body, and a dead man's switch in his hand. They decide to just track him for now.

Skye shows up and Coulson tells her they found Ward. Skye has received information and photos of the woman with the writing carved into her body. Coulson believes she's a S.H.I.E.L.D. agent. Skye says she's just an art teacher, but Coulson is sure he recognizes her.

Coulson and Skye got to check out the woman's home. They find no evidence of her being a S.H.I.E.L.D. agent, but find a room full of paintings of the alien writing. At least one is labelled "a magical place."

Coulson begins overlaying the woman's painting on top of his own carving. There's overlap, but she has more pieces that he was missing. Skye finds that the woman was an S.H.I.E.L.D. agent after all, stationed at the Triskellion, but that she supposedly died of cancer five years earlier.

Mack and Fitz find and bring back her body for Simmons to examine. Coulson is beginning to remember more about her, but finds it odd that the memories aren't just there.

Ward offers to help a woman and her son outside a bus station. The woman is Eliza and the bo Graham. He tells them his name is Zach. He helps them onto the bus, but then abruptly moves to the back. He takes a scene next to Agent Morse, who is undercover. They make small talk, but Ward calls her out as working for Coulson based on the fact that she has made no progress in her book. He reminds her of the dead man's trigger, then gets off the bus. He jumps on a different bus, and doesn't notice Hunter undercover in a seat behind him.

Simmons says the woman's murder seems ritualistic, and that it's likely not the first time he's killed. She also recognizes the carvings from what Garrett was carving. They found DNA samples of her killer under her fingernails. Both the killer and the victim had GH 325 in their blood, marking them as T.A.H.I.T.I. patients. Coulson reveals the mind reading device that Raina had previously used on him hidden in a secret room, and says they'll have to torture more information out of him.

Skye questions the wisdom of Coulson dredging up the same kinds of memories that drove the other T.A.H.I.T.I. patients insane. Skye holds Agent Stevens' photo in front of Coulson and tells him to focus on her.

Coulson flashes back to the interview room at the Guest House. He has Stevens in front of him. She tells him she was dying so she volunteered for the project. He counts six patients total, which he recommended for immediate release. He then sees Stevens writing the alien script on the table for the first time. He then sees the others exhibiting side effects, all except for the killer. Coulson recommends the project be shut down and the host be destroyed. Another member of the project says they can't do that, that the host is older than the pyramids. She thinks the host might be forcing its genetic memory onto the patients, and that if they erase their memories it will make room for them and they can leave normal lives. He sees the same brain tweaking process he underwent happening to a patient. He begins naming names.

Ward goes inot a bar. The bartender offers him a Columbian necktie or a bullet to the head. He picks the bullet, and the bartender pours a drink, on the house, welcoming Ward back. Bakshi pulls up and enters, with men at his back. He and Ward talk. He says that since Strucker is overseas, he wants to know who Bakshi is reporting to. He promises he can get him close enough to Coulson to put a bullet in his head.

Only two of the T.A.H.I.T.I patients are still alive. Coulson is trying to remember a clue about which is the killer. He remembers the killer screaming "I need to know." May contacts Skye. Skye tells her about Coulson. Coulson begins to react violently, and Skye pulls a gun on him. He calms down and agrees to be locked up, at May's request. Skye walks him down to the holding cell, but Coulson pushes Skye into the cell. He goes to take care of the killer personally.

A man is playing with a train with his son. His wife comes in and says an old friend is here to see him.

Mack and Fitz are playing video games, discussing Coulson. Fitz mentions that brains always have backup files, which makes Mack wonder if Fitz has his own. Simmons sees Skye in the cell and lets her out. She tells them about Coulson.

Coulson is there to see the man, a Mr. Thompson. He tries to warn the man, but the man defensive. Then Coulson pulls a gun on him, and says he needs to pick his brain.

May, Trip, Hunter, and Morse make a plan of attack in the van. They need to get a fast, clean shot on Ward so he doesn't blow the bomb.

Coulson asks if the man recognizes or has reproduced the alien symbols. The killer has already been there, and sneaks up behind Coulson and knocks him out.

May's team moves in. They find Bakshi tied up, with tape over his mouth. The tape has "For Coulson" written on it.

The killer ties up Coulson and Thompson. The killer says pain makes him remember things that Coulson erased. It's why he keeps cutting into his victims. He figures out that Coulson is one of them. The killer reveals the tattooed writing on his body. Coulson says he's trying to find out the meaning as well. Coulson sees the train track and realizes that its part of the pattern, that it's not two dimensional. Thompson gets free and takes his family. He frees Coulson first.

Mack is driving with Skye towards Coulson. Skye explains what T.A.H.I.T.I. was. Thompson gets their attention on the road.

Coulson getst he kller and holds him, forcing him to look at the train tracks. Mack and Skye get them at gunpoint, but the killer calms down. They look down at the tracks and realize the writing is not a map, but a blueprint for a city.

Thompson thanks Coulson for helping him figure things out. Coulson says the compulsion is gone now that he knows what the writing is. Now they need to find out why the alien was going there. They have Bakshi in the cell. Coulson gives Bakshi's phone to Skye to see what she can get from it.

Coulson gathers his team and explains his past and present state of being. He says Hydra is trying to solve the same puzzle with more resources. He shows them the city blueprint.

Ward puts on some music and begins shaving his beard. He then buzzes his hair. He and Skye are listening to the same music. Skye gets a call from an unknown number on Bakshi's phone. It's Ward. He says there will be more gifts like Bakshi. He suggests they get rid of the new recruits. He looks at a paper with his brother on the front page as he packs his bag.

Agents of S.H.I.E.L.D. Season 2 Episode 7: The Writing On The Wall Recap With Spoilers