The latest season of Marvel's Agents of S.H.I.E.L.D. will start exploring some cosmic territory, introducing some new characters in the process.

ABC recently revealed some brand new photos from the first three episodes of Season Five, including "Orientation (Parts 1 and 2)" and "A Life Spent."

Check out the new photos in the gallery, showing the abducted team getting used to their new surroundings and getting acquainted with their new flatmates. 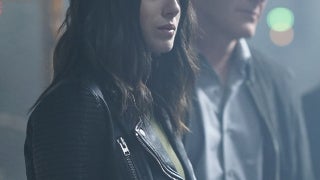 We caught a glimpse of the season premiere at New York Comic Con last month, which shows a mysterious being wearing human skin like a suit abducting the team from the diner in the Season Four finale.

When they come to, Coulson is standing in front of a broken window on a space station with time frozen still. As it slowly kicks in, he has to quickly grab onto something before getting sucked out in the cold vacuum of space. After the breach is sealed, he quickly becomes acquainted with some of his crew mates who are just as confused as he is.

Before they can figure out what is happening, where they are, or even what year it is, they realize they are being hunted… by an alien predator.

The synopsis for the new episode teases at the events:

Coulson and the team find themselves stranded on a mysterious ship in outer space, and that's just the beginning of the nightmare to come, when Marvel's Agents of S.H.I.E.L.D. returns for its highly anticipated fifth season with a special two-hour premiere.

Hopefully we learn more about the new threats to the agents as well as the involvement of the Kree when Agents of SHIELD Season 5 returns to ABC on Friday, December 1.