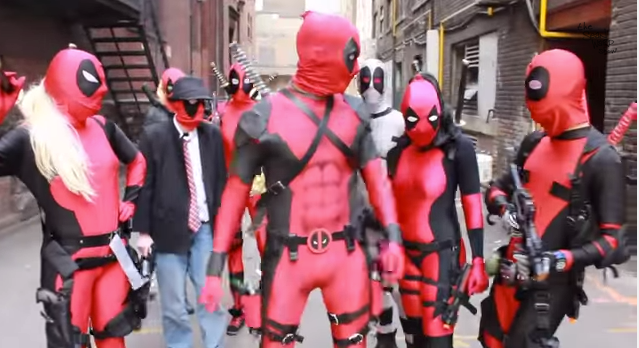 At least, that's what the Sean Ward YouTube series thinks. In honor of Merc With A Mouth's upcoming film, Deadpool decided to head back to the lab and clone multiple copies of himself. Creating over half a dozen of his various incarnation, including Lady Deadpool and Uncanny X-Force Deadpool, the original creation soon realizes that everyone else wants their own Deadpool movie too. The only way to solve this dispute? Why, with a shootout, of course.

The Deadpools proceed to blow each other's brains out for a few solid minutes, before realizng that their resources would be far better spent hunting chimichangas. The Deadpools then embark on a red-and-black rompus through the city looking for the beloved Tex-Mex dish. Unfortunately, the coffee shops and Subways that they visited did not carry them. Shame. But the lack of fried burritos didn't slow down the live-action Deadpool Corp. They actually only seemed to liven up. Their next stops included a comic book shops where they—surprise!—picked out all the Deadpool graphic novels and merchandise.