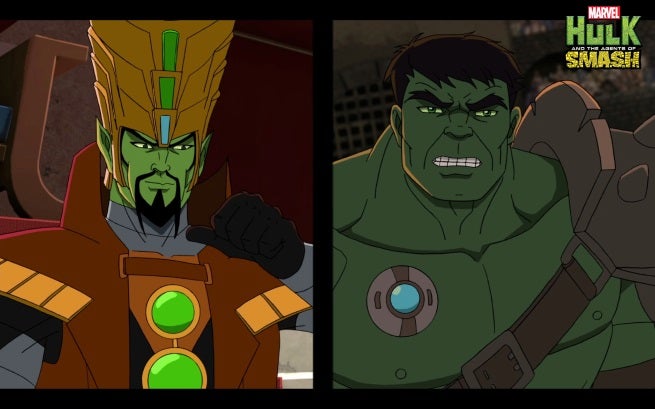 Marvel has released a preview of this Sunday's episode of Hulk and the Agents of S.M.A.S.H., "Planet Leader."

The episode has Hulk and his agents head to Skaar's home planet, Sakaar (which fans of Hulk comics will recognize from the Planet Hulk storyline), where the Leader has taken over and enslaved the population.

BIG HEROES! BIG VILLAINS! AND BIGGER ADVENTURES this week, Share Your Universe with a brand new episode of Marvel's Hulk and the Agents of S.M.A.S.H. this Sunday at 8am/7c inside the Marvel Universe on Disney XD.

Marvel's Hulk and the Agents of S.M.A.S.H.- "Planet Leader"

The Leader becomes more than the Hulks bargained for after they get transported to Skaar's home planet, Sakaar, where they must stop The Leader from controlling not only the entire planet, but the Hulks themselves! Skaar finds that the planet he left behind may not have missed him as much he has them…in fact they are dead set on revenge against him! How will the Hulks convince this planet that they are there as heroes and not villains?

Hulk And The Agents Of S.M.A.S.H. Preview: Planet Leader