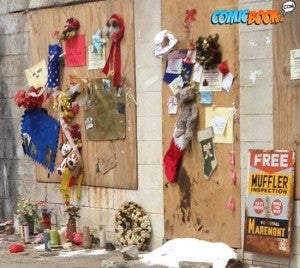 has uncovered these exclusive set photos that indicate that Iron Man 3 will feature some kind of game-changing disaster on December 12 in-story. We pride ourselves on bringing you quality pictures, articles, interviews and more, so it should come as no surprise that we've been bringing you some of the best photos out there from the set of Iron Man 3.  If you've been looking for some, here's even more!  These photos detail a tragedy in a small town. "Christmas will never be the same," says one sign, an extension of our previous reporting that some of the scenes set in Miami and shot earlier this year in North Carolina would be set around Christmastime. According to our sources, while filming of Iron Man 3 takes place in Rose Hill, North Carolina, the setting will be Tennessee, based on the bank and other aspects of the town detailed on some of the buildings.  The real story here though is this crash scene and the memorial surrounding it.  If you take a look at the building and its pieces, you can see that something awful happens, especially to a certain beloved town hero. This first photo looks like some massive crash of some kind.  If you look at the other pictures of the memorial on this page, could this indicate someone falling and crashing from somewhere?  An accident involving the Mandarin?  Something that happens while Tony could be hiding out in a small town?  The picture of the blown out building could be the main point of impact and the hole in the ground could be collateral damage.  The wide shots of the crash site look like the damage is pretty isolated to this one location, but it looks like it's now become a sacred memorial site of some kind.  Take a look at some of the other pictures. The other pictures focus on the memorial, specifically focusing on the date 12/12.  It's obvious someone has died here, and the many Christmas well wishes to the victim are plenty.  Could this site have something to do with the scene we ran earlier of Pepper Potts being rushed to the hospital? No clear sign, either in the photos or from word around the set, as to what actors are involved, either in the December 12 tragedy or in shooting this scene at the apparent memorial. It all seems that this film will definitely touch on a significant piece of life in this small town, and maybe this is what leads Tony to spend so much time in the hush hush bar set that has been constructed in the town.  Take a look through some of the other pictures and get a feel for what you think is going on in this scene!  There are certainly some that are worthy of closer inspection, and if you look at the depth of detail from the crash site memorial specifically, it could very well be a key piece of the filming location! [gallery columns="2"]