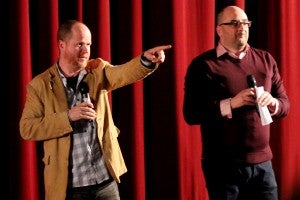 During a Q&A session in support of his film adaptation of William Shakespeare's Much Ado About Nothing, Marvel's The Avengers director Joss Whedon shared his philosophy for the sequel with the audience. "Death, death and death," Whedon joked. Of course, while that might worry some fans--especially given Whedon's personal track record on the matter--it's probably not a bad idea to take a deep breath and remember that the film's villain will reportedly be Thanos, the death-worshiping Titan at the center of The Infinity Gauntlet. "When I first considered doing Avengers 2, my first question was what can I do that's new?" The director is quoted as saying. "Because I can't make it bigger....but I can make it better." There's not a full transcript, but you can hear audio of the Q&A session at Whedonesque, from whom we borrowed the photo above.