The Avengers are set to take over TV, but not in the way you might expect.

Today Disney Channels UK and Ireland announced that it will launch a new pop up channel centered around Marvel's Avengers. The Marvel Avengers Channel takeover will kick off on April 1 and run through the remainder of the month (April 29) on the Sky and Virgin Disney XD +1 channels.

David Levine, General Manager of Disney Channels UK and Ireland commented, "With the launch of Marvel Studios' Avengers: Infinity War just around the corner, this pop-up channel will bring together all of our fantastic Marvel Avengers content, showcasing the most popular characters from the Marvel universe. The Avengers continue to inspire kids and the pop-up channel will allow them to further experience all things Iron Man, Captain America and much more!"

That content will include What the What and Who's Who, which will give fans a closer look at the film before it releases later that month. That program will include interviews with the Infinity War stars, fan recaps of the other MCU films, and quizzes and Q&As with the cast. Spider-Man star Tom Holland will host one of the episodes as well, giving rundowns of the characters appearing in the film. 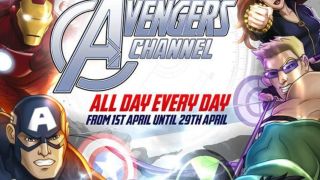 You can get a first look at the new channel in the video above as well as the gallery.

It all makes sense, as Avengers: Infinity War is shaping up to be a massive film, bringing together the previous MCU movies together in a way that fans have been waiting 10 years for. Granted, you had us at Funko shorts, but the other programming sounds amazing as well.

Fans can still enjoy Black Panther, which is in theaters now. Avengers: Infinity War lands in theaters on April 27, and Ant-Man and The Wasp soars into theaters on July 6. Captain Marvel hits theaters on March 8, 2019, followed by Avengers 4 on May 3, 2019.

Marvel's Avengers Are Getting Their Own TV Channel