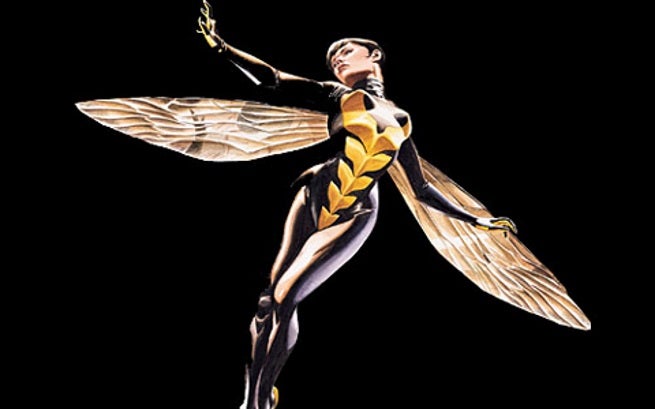 Earlier today, ComicBook.com reported on new Instagram photos from Ant-Man actress Evangeline Lilly, showing off her new, Wasp-ish haircut from the set of the film.

While discussing the same photos, BadAss Digest also brought up the mystery of what happend to Hope Van Dyne's mother, Janet Van Dyne, in the Marvel Cinematic Unvierse. In the comics, Janet is the Wasp, a founding member of the Avengers, and Hank Pym's (the original Ant-Man) wife.

At Comic-Con International: San Diego, Michael Douglas, who plays Pym in the film, spoke a bit about his character, including reference to his wife, saying "My name is Dr. Henry Pym. I'm an entomologist. I'm also a physicist and I discovered in 1963, a way, a serum to reduce a human being to the size of ant maintaining the strength. Not only that, but I was able to find a way to communicate with the ants. But unfortunately during this process, a tragic personal accident happened with my wife, my daughter, Evangeline, Hope. So I've had to pass my powers and strengths onto a mentor. Because my partner, my partner, Corey over there, f–ked me good."

Some have specualted, based on these comments and her absence from the film, that Janet was made a "woman in a refridgerator" - a female character abused, raped, or killed for the express purpose of advancing a male character's character arc - prior to the events of the Ant-Man film.

By the way, there have been some claims that Janet Van Dyne was 'fridged' before the movie opens. Again, I don't have working knowledge of the latest draft of the Ant-Man script, but previous drafts had her 'gone,' not dead. That's vague, and could mean Janet is lost in the Microverse, ready to show up in a future film. Also, technically speaking, having Hank Pym be a widower isn't the same as fridging Janet - there are specific things that go into fridging, and they're about using the death of a woman to motivate a male character.

For those who don't know, the Microverse is a parrarlel universe that is only accessible through the use of energies used to shrink beyond sub-atomic levels. It's possible that Janet is not dead, but that an accident with one of Pym's experiments accidentally trapped in this universe.

It's also worth noting that many rumors suggest that the film includes a flashback sequence, which could possibly be used to explain the fate of Janet Van Dyne prior to the film's present day events.

More Ant-Man Rumors About The Fate Of Janet Van Dyne