Deadpool is taking a worldwide tour for his upcoming sequel, and these new international posters are absolutely perfect.

Three new Deadpool 2 posters have surfaced, each one featuring a different lead character. Deadpool (Ryan Reynolds) himself, of course, takes the spotlight for the first one, getting uncomfortably close to the number 2 (literally). The second poster features Domino (Zazie Beetz) branding her favorite firearms and putting Deadpool under her foot where he belongs. The third poster features the curmudgeonly Cable glaring at whoever is taking the photo, but Deadpool is trying to warm him up some by resting on his shoulder.

Yeah, we don't think that's going to work, but maybe that's just us.

You can check out the three new posters in the gallery.

While Cable might be a bit rough around the edges, Deadpool 2 director David Leitch couldn't be happier to have Brolin on board for the part and is genuinely impressed with how much he's brought to the character.

"When he graciously agreed to do the role, Ryan [Reynolds] and I were through the roof; we love him," expressed Leitch. "He's such a great actor, he brings a humanity to Cable, but he also has the depth of acting chops to hang with the comedy when needed. He's bringing that character to life in the short 12 days we've been shooting and I couldn't be happier." 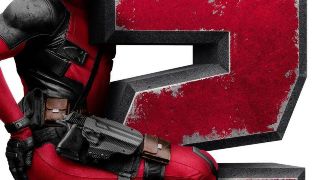 "The way we've watched his transformation--I mean, I immediately started following his trainer," Liefeld joked. "Eventually, when I get the guts up, I'm gonna ask, 'I'd like to have that training regimen please.'"

Hopes are high that the sequel can deliver a quality followup to the original, and so far it seems the film is trending in the right direction.

Deadpool 2 cruises into theaters on May 18, while X-Men: Dark Phoenix lands in theaters on November 1. The New Mutants is slated to hit theaters on February 22, 2019.