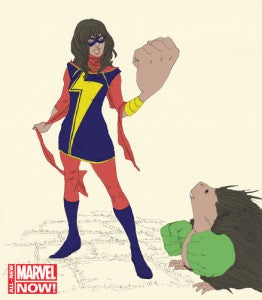 When Carol Danvers, the longtime occupant of the superhero name Ms. Marvel, rose to embrace the role of Captain Marvel instead, it was quite a to-do, complete with her own, new ongoing series and a fair bit of press attention. Particularly coming as it did at a time when there was a lot of discussion of the way female characters and creators were being treated in the comics industry, the ascension of Carol Danvers to a role previously occupied by one of the most respected and significant characters in Marvel's history was such cause for joy that almost everybody overlooked the fact that there had already been a woman--and a woman of color for that matter--in the role before. Filling the Ms. Marvel role, then, demanded something special. For a while, it seemed as though the name may simply fall into disuse, since having a "Ms." on the front of your superhero name has become unfashionable these days anyway and after all, it's not as though Marvel has to worry about keeping the trademark alive on the character. They didn't even have the original Captain Marvel and they've over time managed to force DC to stop using that name. 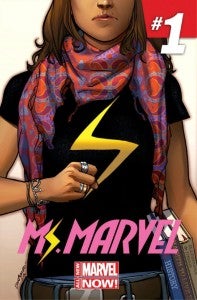 But at New York Comic Con, one of the weekend's biggest announcements was that there would, indeed, be a new Ms. Marvel, while Carol's Captain Marvel would get another shot at a new #1, this time with a promotional push from All-New Marvel Now. As will the new Ms. Marvel. In February, the New York Times reports, Marvel Comics will introduce Kamala Khan, is a teenage Muslim girl living in Jersey City, who will take up the moniker of Ms. Marvel, along with a modified (and more teen-friendly, arguably) version of the classic costume. Introducing minority characters in the form of legacy characters is one of the key ways both Marvel and DC have striven to diversify their character libraries, but it's sometimes dicey business with the fans. Ever-present in the comments threads on stories like this is the fan criticism that a new female/Muslim/Hispanic/name-a-group character ought to be created from whole cloth and rise to popularity as their own character rather than doing so on the coattails, and sometimes at the expense, of characters who came before. "Any time you do something like this, it is a bit of a risk," series writer G. Willow Wilson, a convert to Islam, said. "You're trying to bring the audience on board and they are used to seeing something else in the pages of a comic book." That outrage is mostly voiced, though, when the "original" character is missing in action. That Carol is very active in the Marvel Universe may dull the edge of those kinds of remarks. The reason those comments are often ignored by the publishers is multifaceted. First of all, it's very difficult to get traction with new characters. Based on a quick browse through Marvel's solicitations, titles whose solo or named lead (so, we're including Cable and X-Force here, since Cable is named) was created after 1985 is solidly in the single digits across their in-universe publishing line (we count four, two of which are miniseries). Subverting that, attaching a "known" name, especially one that hasn't been used in a while, to a new character immediately gives readers a sense for the type of book they should expect. Success stories with this strategy include Hawkeye, Manhunter and Blue Beetle. It's not uncommon, when a character like this fails, to reintegrate the original character into the universe because the failed attempt can be blamed on the new character and fans will want more of the original. A modified version of this can be seen in Firestorm, where Jason Rausch is a fan-favorite but can't seem to support his own book; when The Fury of Firestorm the Nuclear Men launched in the New 52, they teamed him with "classic" Firestorm Ronnie Raymond. There's also never, that we can recall, been any serious, long-term damage done to a character or franchise from a new version jumping on board and being disliked. The blue, alien Starman didn't sell well enough to retain his "title" but certainly when the next Starman series came along, the character was no worse off for it. Characters at both Big Two publishers, from Dr. Fate and Green Lantern to Captain America and Spider-Man, have seen "replacement heroes" step in and hold the mantle for a while, and when the original comes back, sales have generally been higher than they were at the time of the character's exit. Spider-Man's "Clone Saga" is a notable exception, but that's really a different issue entirely. That said, Wilson's religion may make her a target for criticism; writers who are seen as putting too much of themselves into superheroes with long legacies often suffer for it on the Internet (just ask Judd Winick or Devin Grayson). It may help deflect some of that, though, that the Times reports the character was brought to Wilson this way, and that Ms. Marvel's "conversion" wasn't something the writer dreamt up.

"Captain Marvel represents an ideal that Kamala pines for," Wilson said. "She's strong, beautiful and doesn't have any of the baggage of being Pakistani and 'different.' "

Series editor Sana Amanat, who came up with the concept along with Steve Wacker, told the newspaper, "It's also sort of like when I was a little girl and wanted to be Tiffani-Amber Thiessen," from Saved by the Bell.

So, yes, being Muslim will play into the book, something that may affect its perception, both positively and negatively, with critics and fans.

"Her brother is extremely conservative," Amanat said of the character. "Her mom is paranoid that she's going to touch a boy and get pregnant. Her father wants her to concentrate on her studies and become a doctor."

Besides the obvious fact that the new character is a Muslim and a woman of color, it's arguably notable that Marvel has her living in Jersey. This is yet another title in the context of Marvel NOW! that takes the lead character out of New York, something that the publisher has resisted for years. With Daredevil recently having announced a cross-country move and Venom currently residing in Philadelphia, the Marvel Universe seems to be getting geographically bigger, even while uber-team-ups dominate the publishing line and almost every title has a direct tie to the X-Men or the Avengers.