Marvel Comics has announced Thanos: The Infinity Conflict, the next chapter in the long saga of Thanos, the Mad Titan.

Thanos: The Infinity Conflict releases in November. The original graphic novel is written by Thanos's co-creator Jim Starlin (The Life of Captain Marvel, Thanos: The Infinity Revelation) and drawn by artist Alan Davis (Guardians of the Galaxy: Mother Entropy, The Infinity Eternity) and pits Thanos against his own future.

Thanos: The Infinity Conflict is part of the second trilogy of Starlin and Davis Thanos stories, and promises to take the Mad Titan "on an epic, wild adventure" featuring Adam Warlock. 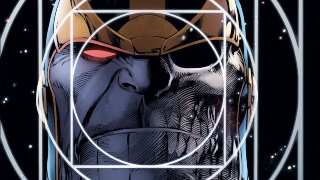 Here's a quick synopsis of the graphic novel's story:

"Armed with the Reality Gem, Thanos is now poised to become the lord of all reality, until he learns that his troublesome brother and time travel aren't the only things that stand in the way of claiming his powerful reign."

Marvel teases a surprising reveal of who stands between Thanos and victory. Check out preview pages in the attached gallery

This current Thanos trilogy with Davis may be the last time that Starlin works on his famous creation after announcing that he has cut ties with Marvel Comics.

"Just to set the record straight, Marvel Comics didn't pull me off any books, they just made it clear they weren't interested in using me on any of the tie-in series to the movies or regular series," Starlin stated in a Facebook post. "Even though I lobbied heavily to write the Thanos on-going that task was twice given to other writers, which is Marvel Editorial's right to do.

"What I objected to and what will keep me from doing any further work for Marvel Editorial was Tom Brevoort approving a plot for the current on-going series, which was pretty much the same as the Thanos story arc in the graphic novel trilogy Alan Davis and I have been working on for Tom for close to the past year. He had 200 pages of script and 100 pages of pencils on this project when he gave the green light to a strikingly similar plot. The on-going will be in print before the graphic novel trilogy. TO avoid spoiling anyone's enjoyment of these two stories I will not be summarizing the striking similarities."

The suggestion that Thanos will be facing off against himself and that time travel is involved in the trilogy may begin to shed light on those similarities, since Donny Cates' run on Thanos has brought the Mad Titan face to face with a version of himself from the future.

Thanos: The Infinity Conflict goes on sale in November.