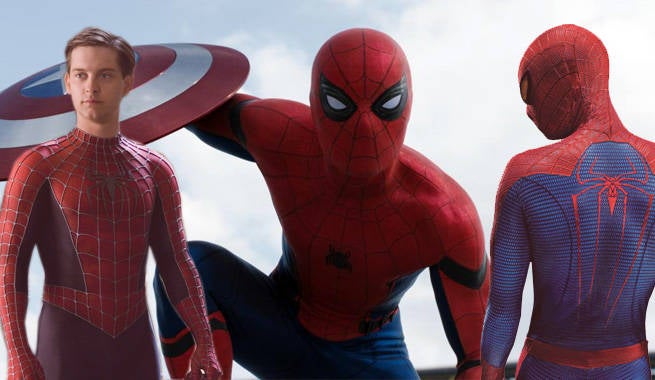 With his debut in Captain America: Civil War, Tom Holland inherits great responsibility in the role of Spider-Man. He is the third actor to take on the role since Tobey Maguire started the original Spider-Man franchise in 2002! However, reviews for the film have probably been taking a little weight off of the young actor's shoulders because Spider-Man has been a popular high point according to most critics and fans.

That said, Holland is and always has been aware of how important it is to differentiate his Spider-Man from Andrew Garfield and Tobey Maguire's. "It was pretty daunting at first, I'm not gonna lie," Holland admits to HeyUGuys at Captain America: Civil War European premiere.

"It was very difficult to not obviously copy what Andrew and Tobey had done because because what they did was so brilliant," the British actor goes on. "I think our main difference is trying to make Peter feel like a kid and in the film you see a kid reacting to meeting the Avengers for the first time. I think that's one of the things people love about these films is seeing real life occurrences happen in these crazy films and that's exactly what happens to Peter in his house."

In Civil War, Holland does just as he said. His portrayal of Parker brings a sense of youthfulness to the character like never before, stemming mainly from his voice and fun, childish, and curious attitude.

Tom Holland Explains How His Spider-Man Is Different