The mission statement that motivates the X-Men has long been, "Sworn to protect a world that hates and fears them." It goes hand and hand with the mutant metaphor. Humans view mutants with mistrust or disdain, and the X-Men protect them anyway. Different X-Men series have attempted to embrace or avoid dealing with this notion over the years. In X-Men Red, Tom Taylor and his artistic collaborators -- Mahmud Asrar, Carmen Carnero, and Roge Antonio -- both embrace it and allow it to evolve, creating the best X-Men series in 10 years.

Not since Grant Morrison's run on New X-Men has a writer applied such a fresh and modern take to the very concept of mutants in the Marvel Universe. X-Men Red begins with the return of Jean Grey, who has been dead since that Morrison run in the early 2000s. It doesn't take her long to realize that the world she's returned to has changed. But realizing it isn't the same as accepting it.

"I'm alive again," Jean says as the story begins. "But I need you to understand, I'm not content to return to the same life. I refuse to accept this world for how it is. I'm going to change it."

She builds a team around her, but they aren't unified by a threat or a school. Instead, she gives them a vision, a dream of her own, one that inspires them all to want to fight by her side.

It isn't long before they're challenged. Taylor uses Cassandra Nova as the series' villain. Nova is a psychic entity, a being of pure hate bent on destroying mutants because her twin brother, Professor X, loves them. As an avatar for the wanton malice that seems to fill up our social media timelines and news reports, Cassandra Nova is perfect.

Nova sets out to spread hatred for mutants among humanity using nano-Sentinel technology and a campaign of misinformation. She frames Jean for the assassination of a UN delegate, but Jean's team finds proof that Jean is innocent and that Nova has been tampering with the minds of men. Jean is canny enough to recognize that proof won't be enough in our "post-truth" world. That's where Jean and Taylor get to lay out their updated version of that "fighting for a world that fears and hates them" mission statement. 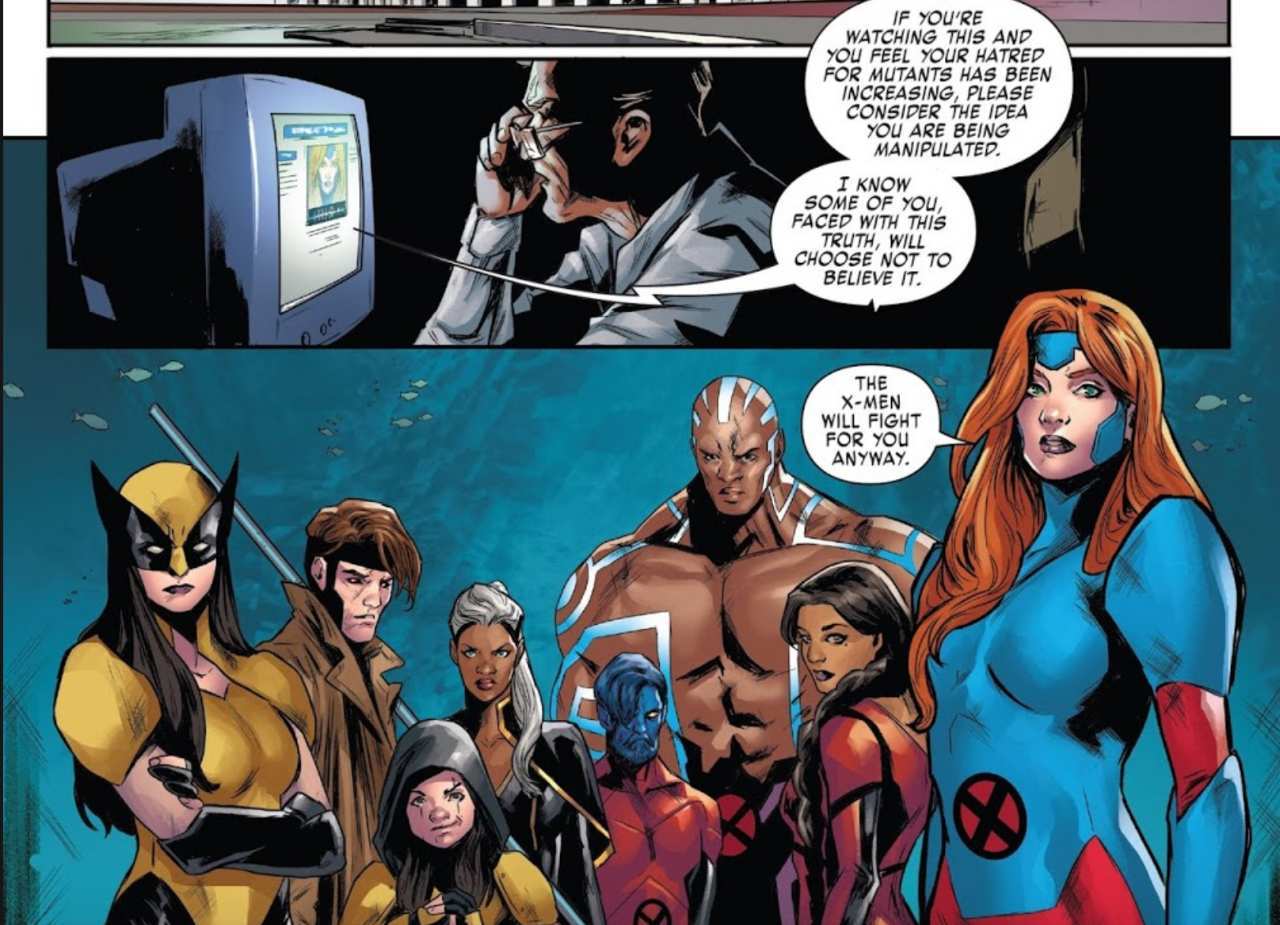 "If you're watching this and you feel your hatred for mutants has been increasing, please consider the idea you are being manipulated. I know some of you, faced with this truth, will choose not to believe it," she says. "The X-Men will fight for you anyway."

And they do. With her team at her side, Jean sets about "weaponizing the truth," waging a full-scale culture war against Cassandra Nova and creating a mutant safe space under the sea in Searebro. New mutant Trinary, Taylor's own creation, is key to the story, using her technopathic abilities to turn weapons of hate like Sentinels and Internet trolling into weapons for good. Technology is, after all, only a tool. What matters is how you use it.

For years, X-Men comics have debated whether Cyclops or Wolverine is the truest successor to Professor X's dream; Jean Grey shows that the answer is neither. She's the only one of the three to offer a new vision that doesn't just match Xavier's, but exceeds it. She's also the only one to match the kindness that Professor X showed in his best moments. She convinces a team comprised halfway of born killers and thieves to fight a war of ideas rather than one of physical violence. She does this with vision and disarming charm, a charm communicated so perfectly by Carnero's artwork when Jean looks into the mind of Honey Badger, who just volunteered for a selfless but painful act of heroism, and tells her that she can stop worrying about her sweaty hands.

Asrar, Carnero, and Antonio make Jean's team look good when they're in action, but the beauty of the story's climax is in how it doesn't rely on straight violence. Yes, the X-Men team up with the Avengers to prevent a war, and they all wear Magneto helmets to prevent Nova from mind-controlling them, which is a stunning visual moment. But in the end, it isn't violence that solves the problem of Cassandra Nova; it's empathy. Sure, it's empathy applied directly to Nova's brain, but it is empathy nonetheless.

Jean recognizes that Nova was "put together wrong," that her environment contributed to the feelings of hate that drive her today. Jean could see Nova as the enemy and seek to destroy her, but she doesn't. After all, the X-Men fight for an entire world that hates them. Why should Nova be any different?

X-Men Red is the best and the boldest X-Men comic to come along in years. It takes on the challenge of re-examining what the X-Men's core credo means. It restores meaning to that credo after years of watering down by countless battles. The craft is excellent, and the creators have the vision to match the one Jean carries with her. We can only hope that upcoming X-Men comics embrace this restoration rather than retreat into nostalgia and bare superheroism.