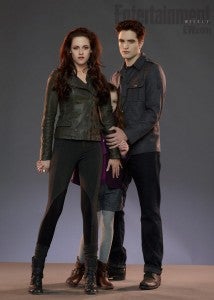 Earlier today on their website, Entertainment Weekly unveiled ten new photos from The Twilight Saga: Breaking Dawn, Part II. The film, which sees Kristen Stewart's bella taking on two new roles--those of mother and vampire--will hit the theaters on November 16. The photos largely revolve around Bella's new family unit--featuring Stewart, Robert Pattinson and newcomer Mackenzie Roy as their daughter--but give a few sneak peeks into other areas of the film as well, and even what seems likely to be a moment of levity, when Stewart (at 95 pounds soaking wet, but now with super-vampire-strength) squares off with musclebound Emmett for an armwrestling match that can only end badly for him. The set, meanwhile, needed some toning down, according to the story that ran alongside photos of the EW cover shoot, to accommodate Roy. "We're all around the same age and we're really not polite to each other anymore," Pattinson told the magazine. "You'd have to tone it down when Mackenzie was around. She had a little swear jar, and I think she made 850 bucks or something." [gallery link="file" order="DESC"]